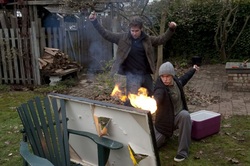 Writer: Will Reiser
Director: Jonathan Levine
Starring: Joseph Gordon-Levitt, Seth Rogen, Anna Kendrick, Bryce Dallas Howard and Angelica Huston
When we think of situations with potential comedic consequences, getting cancer is certainly not near the top of that list. However in 50/50, writer Will Reiser provides a semi-autobiographical look at the joy that can be found in a painful situation. Adam Lerner (Joseph Gordon-Levitt) is a twenty something who doesn’t drink or smoke (But crucially does recycle) however finds himself with a rare yet incredibly life threatening back tumor. This ordeal weakens his relationship with his girlfriend (Played by Bryce Dallas Howard) however strengthens his relationships with his best friend (Played by Seth Rogen) and a trainee therapist (Played by Anna Kendrick)

50/50 is a film that faces the tough task of providing an equally effective balance of both comedy and tragedy. What is important to note about 50/50 is that it never laughs at cancer; the incredibly frightening disease or its effects are not fodder for crude gags. The humour in 50/50 instead comes from the way in which we as a society deal with an illness of any kind. As is expected Seth Rogen’s character provides the majority of the films comedic elements and he gives his best performance since Knocked Up. While Rogen is doing nothing outside of his comfort zone and is playing the same foul mouthed, drug addicted buffoon that he has made a career out of, there is sweetness to him in this film and more of a believable dramatic depth than was provided in his more recent work.

The performance that everybody is rightly talking about however is the performance of Joseph Gordon-Levitt. As Adam Levitt gives one of the best performances of his career to date and one of the more relatable lead actor performances of the year. He is not a general manager of a baseball team, a man suffering from apocalyptic hallucinations, a revolutionary ape or a man who has begun to deliriously communicate with a beaver hand puppet. Adam is a normal guy who is going through an ordeal that can strike any of us at any time. The performance of Joseph Gordon-Levitt is like the film rather understated for the majority of the running time. In the moments when Adam’s emotions do come to the surface however, Levitt has you well and truly moved, with a couple of scenes towards the end tugging incredibly hard on those heart strings.

Anna Kendrick gives a supporting performance, which like Rogen’s doesn’t push her out of her comfort zone. Kendrick and Levitt have a superb chemistry together however and while the arc of their two characters may seem slightly forced and more cliché than the rest of the film, their performances made it not just bearable but also rather enjoyable to watch. Angelica Huston plays the role of Adam’s mother and has one of the more emotional roles of the piece as a woman with a husband who can’t talk to her and a son who won’t (As Kendrick’s character points out in one of the film’s best lines) At times there is a desire for this area of the narrative to be developed slightly more, however Huston is effective in the screen time that she has.

What is slightly surprising about 50/50 is how subdued a lot of the film is. It could have easily been both more euphoric and more depressing in certain areas and its understated nature perhaps comes from an air of honesty stemming from its scriptwriter. Events in life don’t happen the way they do in the movies and 50/50 seems to be a film saying just that. After watching interviews with Rogen and Reiser however, I was left with a desire for more of the reality to work its way into the fiction, as an anecdote of Rogen finding out his best friend had cancer while he was on the toilet seems ripe for comedy cinema.

One of the amusing subplots of 50/50 is the way in which Rogen’s character uses his friend’s cancer to pick up women. While this is an amusing spin on the situation, it is a joke that is perhaps done one too many times and it would have been good to have seen other ways in which both Adam and his friend manipulate the situation to their benefit. Again an anecdote of Rogen using the situation to skip the line into Batman Begins on opening weekend seemed like something else that should have been in the film. In terms of the films entire comedic content it sometimes felt, as they were being very safe with their humour. A little bit more originality and edge when it came to the humour could have made that portion of the film much more effective and therefore memorable. The basis of this complaint is that the humour seemed as if it came from a Judd Apatow film I have seen before, rather than real life.

While 50/50 does not seem like a film, which would lend itself to directorial flourishes, Jonathan Levine imprints a look on 50/50, which means while it may follow recent films in terms of its comedy, it is a little bit more distinct visually. The film’s soundtrack is another positive with it being the second film this year to make effective use of a Radiohead song. 50/50 is also at times a very charming film, with a lot of subtle emotional moments, which could have come across as more forced or manipulative in less knowing hands.

Overall while I think that 50/50 could have been a bit more original with its humour and developed certain aspects of its narrative further, it has a great performance from Joseph Gordon-Levitt, a refreshingly understated demeanor, effective emotional moments and a genuine fell good charm which many films strive for, yet few achieve. 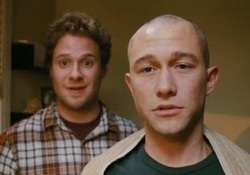 Joseph Gordon-Levitt gives a career highlight performance in this charming, moving and understated film however its comedic content lacks distinction and its supporting characters some depth.

Disagree with this review? Give us your thoughts on 50/50 in the Your Say section.