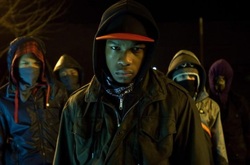 Writer & Director: Joe Cornish
Starring: John Boyega, Alex Esmail, Jodie, Whittaker and Nick Frost
Over the summer we saw large groups of discontented, hoodie clad, London youths destroy their local environments and bring brief fear, embarrassment and disgust to the English nation. Attack the Block opens with a group of children, who given their appearance and location look like the kind of people who would have participated in those actions, mugging an innocent nurse. These lads then become our protagonists for the next gripping, gritty and gloriously gory eighty-eight minutes. Welcome to Attack the Block, one of the year’s most exciting and enjoyable films.

As you can see from the paragraph above, first time director Joe Cornish cuts his work out for himself by populating his cast of heroes with characters who (refreshingly) veer away from Hollywood’s golden rule…likeability. There is no way Attack the Block could have existed in the way it does, had it been backed by a Hollywood studio. First the stinging, swear filled slang that forms roughly 60% of the films dialogue would have been cut, along with the gruesome death scenes for some of the films main characters. However it is the opening which sets up Attack the Block as an incredibly brave film considering it is the director’s (And much of the cast’s) first.

There is an energy to Attack the Block that manages to make you forget the initial horrors these characters have committed in the film (And may have committed in real life) and instead get wrapped up in the best alien invasion movie of the year. Where Attack the Block succeeds where Cowboys & Aliens and Battle Los Angeles fails, is that it moves along at a brisk pace, has moments of genuine tension, is unpredictable and has what are easily the most distinct, effective creatures of the year. What aids this film is the fact that Joe Cornish is a film fan, who shares the same irks regarding modern cinema that many movie enthusiasts do. In promotion for this film Cornish remarked how, “The dragon from Harry Potter could walk into Cloverfield and you couldn’t tell the difference”

These aliens vindicate the simple expression that less really is more. Simplicity is always the key when it comes to memorable screen creatures and to be honest if you are even able to remember what the Super 8 creature looked like, you are probably confusing it with the aliens in Cowboys & Aliens. These creatures however are so simple in their design, that they are etched in my memory. A jet-black body, with neon green glowing teeth…that is all you need to have an effective movie monster. Whoever designed this creature, whether it be Cornish or somebody else, deserves a pat on the back for showing Hollywood how it is done.

The creatures have such an effective selling point (The way in which their body blends in with the darkness) that at times you wish a more experienced director than Cornish (And one with a better grasp on horror) would capitalize on this potential in a different, more suspense orientated film. Cornish however proves that he is a directing force to stay and anybody with an interest in, or a passion for, the art of filmmaking will be impressed and inspired by what Joe Cornish has pulled off with a low budget (He did however have Edgar Wright behind him) The council estate block is transformed into a dynamic science-fiction setting and the action sequences are all pulled off well (With the slow motion denouement being a truly cinematic conclusion)

Cornish also impresses in the writing department however with a script that will make the phrases “Allow it”, “believe” and “trust” common words amongst those who have never even seen a council estate…believe. The British Academy film awards give out the Carl Foreman award each year for achievement by a British writer, director or producer in their first feature film. As far as I am concerned, Cornish has this award in the bag.

As mentioned earlier this film faced an uphill task to make these characters engaging, endearing characters and while Cornish does his job with the direction and the screenplay, it Is the performances from the lead actors that are crucial in not just making their characters work, but the film work. Out of the cast it is John Boyega who is given the most to chew on in the lead role of Moses and he has a strong, silent, subdued demeanor about him that suggests he has a lot potential. Hopefully somebody other than Cornish can recognize and give him the roles he deserves for him to develop as an actor. Alex Esmail is a great little scene-stealer as Pest (Who is given the lions share of the films wittiest lines)

The chemistry between the gang is believable and aided by some intelligent and credible dialogue. There is a possibility however that the way in which these characters speak could be grating to audiences from outside the U.K., if they are even able to understand what they are saying. Also some people despite the thrills of the film may not be able to get over the opening scene and therefore never connect with any of the characters.

Watching Attack the Block after the London Riots makes the film look like much more of a social commentary than was probably originally intended. Cornish spoke to children on council estates and their discontent and lack of respect for the police are glaring in the dialogue for this film. Lines such as, “Walking around trying not to get attacked by some monsters…sounds like a normal day on the block to me”, or a grandmother saying, “It’s not like they have any respect for the police anymore, walking around with knives thinking they own the block” and most strikingly a character asking, “Is that the monsters” is answered with a sort of by one of the children after they have seen that it is infact the police approaching.

While Attack the Block never gets to the Ken Loach or Shane Meadows levels of gritty, social realism, lines like that show that Attack the Block had its finger on the pulse and considering it was written, made and released before the riots, has an eerie social relevancy. The conceit of this film, that up to no good, hoodie wearing youths, can in fact be courageous and loyal, is one that perhaps few people would have had time for in the immediate wake of this summer’s events in the capital. However with the most frequent probable cause cited being the way in which they feel they are not respected or accepted by society, then you could argue that post London riots, Attack the Block is the most significant British genre film not just of this year, but in quite some time. Perhaps the way to stop those riots from happening again is to have aliens invade…

Moving back to the film itself, the techno soundtrack from Basement Jaxx is easily one of the year’s finest. The music combines with the impressive cinematography and energy of the dialogue to keep the film moving at a great rhythm. Finally without giving too much away, the film’s ending is one that I initially thought was edging towards cliché but then rather suddenly (Yet perfectly) ended on a superb, character driven note.

Attack the Block is not a perfect film and you could argue that it could and should be funnier and scarier. However the impressive directorial and screenwriting achievements of Cornish, a great cast with superb chemistry lead by a subtle performance from John Boyega, a refreshing refusal to play by the Hollywood playbook, a brisk length and the most effective and memorable screen creatures in quite some time, make Attack the Block one of the year’s most entertaining films. 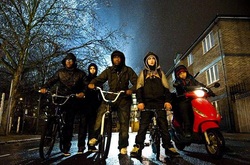 It’s not the Shaun of the Dead level achievement that the hype would have you believe, yet a perfect pace, superb soundtrack, credible character chemistry and amazing aliens make this a daring debut for Cornish and his young cast.

What did you think of Attack the Block? Give us all your thoughts in the Your Say section.