Writers: Kristen Wiig and Annie Mumolo
Director: Paul Feig
Starring: Kristen Wiig, Rose Byrne, Maya Rudolph, Melissa McCarthy, Chris O' Dowd, Jon Hamm and Matt Lucas
Upon its release in the United States, Bridesmaids was met with rave reviews and was hailed as one of the funniest comedy films in years. It went on to become the highest grossing R rated female comedy of all time and the word of mouth hit of the summer. With Paul Feig (Freaks and Geeks) directing and a cast that includes Kristen Wiig (Adventureland, Paul), Rose Byrne (X-Men: First Class, Insidious), Melissa McCarthy (Gilmore Girls), Chris O’ Dowd (The I.T. Crowd), Matt Lucas (Little Britain) and Jon Hamm (Mad Men) I had high expectations for Bridesmaids, could the film live up to the summer of praise and hype?

The story of Bridesmaids centers on Anne (Kristen Wiig) a woman out of luck in both love and business, finding guilty pleasure in her purely sexual relationship with the slimy Ted (Jon Hamm) When her best friend Lillian (Maya Rudolph) announces her engagement, Anne is forced to compete with the rich and beautiful Helen (Rose Byrne) for Lillian’s affections.

The strongest element of Bridesmaids is undoubtedly its cast and its characters. Kristen Wiig is a comedic actress who has always been the bridesmaid and never the bride when it comes to mainstream comedy films. In Bridesmaids however Wiig takes center stage and shows that she should be there for years to come as she keeps you completely sympathetic for Anne throughout the entire film (No mean feat considering some of Anne’s actions) this film is the turning point of Wiig’s career and I look forward to seeing her in more leading comedic (and dramatic) roles.

The films finest moments for me lay in the relationship between Anne and Officer Rhodes (Chris O’ Dowd) the romance that develops between them throughout the film is sweet, charming and utterly believable, with the two of them having a fantastic, genuine chemistry together. Another relationship that provides the film with its finest moments is the rivalry between Anne and Helen. The scene in which the two of them have a speech smack down at the engagement party is one of the films two standout laugh out loud comedic sequences.  Melissa McCarthy gives a performance which provides a lot more subtle laughs than some critics and the trailers would have you believe, with the little things she does being by far the most amusing.

Bridesmaids in general is a film, which is at its best when it is being witty, and subtle, sadly this is nowhere near enough. For a film with such comedic talent in front of and behind the camera it is a shame to see the film frequently fall back into crude, over the top slapstick humour, scenes in the film which stink of selling out to the “mainstream” comedic conventions of modern Hollywood comedy. To see people like Matt Lucas, Jon Hamm, Melissa McCarthy, Kristen Wiig and Rose Byrne generate such laughs from mere facial expressions and line delivery only then moments later to be reduced to vomiting, bumbling, swearing wrecks is a real shame. Maybe this is more down to my comedic taste than the film itself but for me Bridesmaids is a film that did not have enough of the subtlety and wit that really made the film shine in certain, sadly infrequent moments.

With this film getting a lot of press for the fact that is a female led comedy (A rarity), perhaps they were afraid that if they dared to keep the humour subdued they would be too out there to be a hit. While many are proclaiming this a step up from some Judd Apatow fare, Bridesmaids does share one of the huge flaws that plague the films of Judd Apatow, a hugely self indulgent length. Two hours is way too long for this kind of film and it really drags in certain moments, completely killing the films energy and momentum. This film could have easily been cut down into a 90 minute piece and been much better for it, however its indulgent length smacks of an editing process where the filmmakers could not bring themselves to cut down some of their oh so genius moments of comedy.

The final flaw I had with Bridesmaids is that they did not do enough with their characters. The character relationships I mentioned above where given nowhere near the amount of screen time they should and at times it seemed like the film was more focused on delivering in your face, gross out, slapstick humour than continuing to develop its genuinely humorous and interesting characters. While this all may sound like I am coming down too hard on Bridesmaids, I must stress that there were brilliant moments in this film. In fact some of my criticisms come from the fact that I expected a little bit more out of what is a fine bunch of comedic talent.

The airplane scene is a perfect example of what I like to call a comedic “set piece” the multi-layered build up and the perfect pay off is so well handled by Feig and the cast and is one of the highlights of the film. The moments where the film showed us Helen’s world was also hilarious but again in a subtle way, her character was also nowhere near developed as it could have been, with a teary confrontation in the films third act opening the door yet never crossing the threshold. The performances in this film however are uniformly strong and the characters so amusing and believable that I look forward to spending time with them again in what I imagine to be a soon to be green lit sequel.

Overall Bridesmaids is a film which made me smile, laugh out loud on two occasions, contains a genuinely sweet romance, some great supporting players, a solid lead performance from Wiig and a strong enough cast of characters, however its indulgent length and failure to fully capitalize on its characters as well as its selling out to the so called mainstream comedic sensibilities really brought the film down into what is an enjoyable, yet overlong and bar for two scenes and a couple of performances, forgettable piece of entertainment. 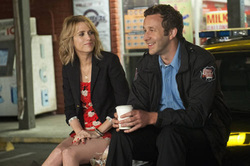 Too long and nowhere near as funny as it could of and should have been, Bridesmaids is a well acted, at times charming and hilarious but ultimately noble disposal which lacks the bravery and discipline to live long in the memory.

Disagree with this review? Give us all your Bridesmaids thoughts in the Your Say section.