Writers: Christopher Markus and Stephen McFeely
Director: Joe Johnston
Starring: Chris Evans, Hayley Atwell, Hugo Weaving, Tommy Lee Jones, Dominic Cooper and Stanley Tucci
2011 has given us two Marvel Studios films, both of which build up to next summers “The Avengers” which promises to bring Iron Man, Thor, the Hulk and Captain America into one film under the direction of Joss Whedon. The second of these 2011 offerings is Captain America: The First Avenger (Or just The First Avenger depending on where you live) Like 2011’s first Marvel offering Thor, this is a film which could have been disastrous given its concept however like Thor, Captain America manages to be an enjoyable, technically impressive and well acted film.

The story focuses on Steve Rogers a small, scrappy underdog who just wants to serve for his country in World War Two. Despite his long list of medical conditions and his frequent rejections he is adamant that he will make a meaningful contribution for his country. This meaningful contribution ultimately comes in the form of a super soldier experiment which will amplify everything about Steve both physically and on the inside, transforming him into Captain America, a symbol of American hope. Captain America was originally devised as a piece of U.S wartime propaganda and its roots are undeniably patriotic towards one country, making it challenging to make him a universally relatable hero. Captain America is nowhere near as patriotic as it could have been and is in fact rather restrained when it comes to flag waving. While films like Transformers and Battle Los Angeles are undeniably in your face pro U.S. films, Captain America does not have any of that jarring and slightly alienating, in your face patriotism.

Part of the reason why Steve Rogers is not just an America hero during the film is down to the performance of Chris Evans. Like the patriotism in the film, he is rather subtle and subdued in the lead role, a world away from his quipping in Fantastic Four or his (brilliant) mugging in Scott Pilgrim Vs. The World. He is a character and a hero who you root for and while he may not be as charismatic or comedic as Tony Stark and Thor, he is probably the most relatable of the Avengers gang. Evans is surrounded by a lot of supporting talent and while none of the supporting cast have any roles that extend beyond pantomime caricature, they all have a memorable screen presence due to their high caliber. Stanley Tucci is great as the scientist behind the super soldier programme, Tommy Lee Jones does the grumpy army general to perfection, saying lines such as “If there is something you want to say now would be a perfect time to keep it to yourself” and Hugo Weaving hams it up gloriously as the villainous Red Skull.

The most impressive elements of Captain America: The First Avenger are in the technical aspects of the film. The special effect utilized at the beginning of the film to turn Chris Evans into a scrawny and weak man is superb and while you know it is fake, it never looks fake. The film does not just deserve a special effects Oscar nomination for that piece of realism but also a Makeup nod for the brilliant work done on Hugo Weaving as Red Skull. The build up to and the unveiling of his true facial features are brilliantly done, making him a memorable screen presence and providing the film with a stand out image. There is also a great deal of fun to be had with Captain America and it does not succumb to darkness nor should it. Stan Lee has a better cameo in this than his one in Thor and the iconic first cover image of the Captain America comic strip is worked into the narrative in a superb way, one of the films best sequences in fact.

There are certain elements however where Captain America: The First Avenger is lacking. The love story in the film fell really flat and was utterly predictable and cliché (However similarly to Thor, I liked how they left the love story at the end of the film) predictability is one of the films main flaws, we know that Captain America is going to survive for The Avengers so why try and make us think that he dies when we can all clearly guess that he hasn’t (That is not a massive spoiler alert by the way for those who have not seen the film) It is also doesn’t help that this film follows some of the EXACT same story beats as the first Iron Man. Speaking of The Avengers, like Thor, this film did a good job of not drowning in Avengers references and standing on its own two feet as its own film…until the end.

Without giving too much away the ending to this film is rather disappointing as an ending to Captain America, merely because it is not an ending to Captain America but rather a preview for The Avengers. It is rather frustrating to see a film that was so independent of the upcoming Avengers film for the majority of its narrative then surrender itself at the end. And finally, while Captain America is not aiming to have the depth of superhero epics such as The Dark Knight and Watchmen, a lot of aspects could have been developed more, in particular the exact nature of the macGuffin.

Overall while the film is largely predictable, underdeveloped in certain aspects and stops to preview The Avengers at the end it is an entertaining summer film with solid performances, impressive technical achievements and a lack of the over the top patriotism that it could have had. Finally, I saw this film in 2D and did not feel like I was missing out on anything apart from a shield coming towards me every now and again, the film looks great in 2D and if you plan on seeing the film or seeing it again, it is in that format where elements such as the retro production design and cinematography are allowed to flourish. 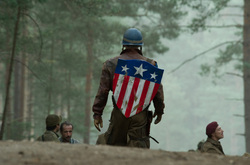