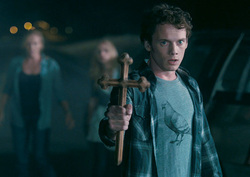 Writer: Marti Noxon
Director: Craig Gillespie
Starring: Anton Yelchin, Colin Farrell, David Tennant and Imogen Poots
Fright Night opens with some wonderfully cheesy yet atmospheric horror music, before the camera rushes through the stormy clouds of a dark night, descends into a quiet home and proceeds to detail a bloody murder before the title hits the screen. This is an opening that gets you enthused about what the next hour and forty-five minutes hold, however unfortunately, save for a few moments, the rest of Fright Night cannot match the fun set by its opening scene.

The plot of Fright Night is Disturbia meets (Insert vampire movie here) as Anton Yelchin stars as a once geek now “cool” teen who is convinced by his still geek childhood friend (Played by Red Mist himself, Christopher Mintz Plasse...that’s right Christopher, I am not typecasting you in the role that everybody else is typecasting you for) that his new neighbour, Jerry (Played by Colin Farrell) is a vampire. Fright Night is a remake of a 1980’s cult classic (Which I have not seen and therefore will not compare this film to it and instead judge it on its own terms) and like many horror remakes does the obligatory update it for the modern era, this mainly consists of characters using modern cell phones and making jokes about Twilight.

Fright Night attempts to be a comedy/horror and in a sense fails as I never really laughed and was never really scared, having said that there is some fun to be had with this film. Anton Yelchin is fast becoming one of the more dependable actors in the business and he gives a performance in this film, which is far superior to the film that he is in. He was solid in The Beaver earlier this year, as well as in his small roles in Star Trek and Terminator Salvation in 2009. None of the rest of the teen cast really registers as they all inhabit the U.S. teen movie stereotypes and clichés (Does it ever rain at any of these U.S. high schools?)

The real fun to be had in this film stems from the performances of Colin Farrell and David Tennant. As a Doctor Who fan, it is nice to see David Tennant in a Hollywood film, even if the script doesn’t capitalize on the maximum potential of his talent. As Peter Vincent, Tennant provides a flamboyant, comic relief character and he dominates every scene he is in. A compliment I can give him is that while I never had the Doctor out of my head, he didn’t make me think of the Doctor...if that makes any sense at all. Colin Farrell is the performance everybody is talking about however and as Jerry he certainly dominates all his scenes, however the latter half of the film I feel really shortchanged his performance.

In the opening movement of the film, where Jerry is playing with Yelchin’s character and the idea that he is a concealed vampire, the performance of Farrell and the film in general really shines. However when the film moves into its more action orientated second half, the performance of Farrell becomes a little more one note and covered by rather well done but slightly cheesy and off-putting (Not in a scary sense but in a bad sense) CGI vampire effects. The best scene in the film involves Jerry asking the Yelchin character for some beer, there is more enjoyment to be had in the tension, dialogue and performance of that scene than in the more graphic, bombastic second half.

The reasons why Fright Night failed to scare me at any point was that it only really seemed to have two tricks up its sleeve in terms of scaring the audience. Either we got a jump scare, which are effective but can become objectionable if over used. Or excessive gore, same rule as jump scares. If the film had created some more tension induced scenes revolving around a claustrophobic neighbourhood, on the outskirts of sin city where a teenager is unsure whether he is living next to a vampire then the film would have been much more effective as a horror. When the film becomes a series of car chases and mutilations however, while there is some fun to be had in well executed sequences (The car chase in particular) it looses that wonderful horror vibe, look and tone it had in its early stages. As a fan of the horror genre, I wanted Fright Night to hold back a bit and maintain that vibe which really got me enthused in the first few minutes and build on the asking for beer scene, rather than throwing all that away for some more explicit yet less enjoyable attempts at excitement.

Where the film’s humour failed for me was that a lot of it was very forced, in the sense that it tried a bit too hard to be hip and of today. Jokes about Twilight have become more annoying than Twilight itself (Which really isn’t that annoying and bashing it is now just lazy, there is no wit left in criticizing that mainly witless series) and when used in this film, it elicited a cringe rather than a chuckle from me. The film’s humour is at its best when it subtly and visually pokes fun at some horror clichés, an example of which being the music reaching a crescendo as Yelchin’s character ventures into a dark space with a flashlight only for Tennant’s character to turn on a light, may not sound funny in writing but the way it is performed and executed makes it so much more effective than throwaway verbal comments about Ebay.

Fright Night is a film, which could have been fifteen minutes shorter, however the fact that the film runs out of steam may have more to do with how I felt about the content shift. The film has a deus ex machina plot device, which reminded me of Prince of Persia and a Russell T. Davies Doctor Who finale, which the film could have done without. However Craig Gillespie, who keeps the film visually interesting, directs the film with some style and shoots both the small town and the big city effectively.

Overall Fright Night is well played by Yelchin, Farrell and Tennant, is directed with some style by Craig Gillespie and is an enjoyable watch if you are a fan of the genre. However it ultimately runs out of steam and is never as scary or as funny as it could and should be.

A trio of good performances and some stylish direction ensure that Fright Night is an enjoyable watch, yet it’s one that runs out of steam and doesn’t fully capitalize on the potential at hand.

Disagree this review? Give us your thoughts on Fright Night in the Your Say section.