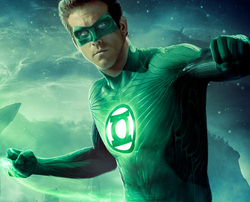 Writers: Greg Berlanti, Michael Green, March Guggenheim and Michael Goldenberg
Director: Martin Campbell
Starring: Ryan Reynolds, Blake Lively, Peter Sarsgaard, Mark Strong, Geoffrey Rush, Michael Clarke Duncan and Tim Robbins
When Green Lantern was released this summer it was met with a less than kind critical response. In a year which has given us five superhero movies, Green Lantern stands along with it’s colour namesake, The Green Hornet, as the worst of the bunch. Where Green Lantern fails where the others succeed is that it cannot decide which story it wants to tell, resulting in a muddled, incoherent, schizophrenic affair, which could serve as a blueprint for how not to adapt a comic book to the big screen. This isn’t a film that incites hatred but instead immense disappointment that such a cast, budget and director could be wasted away due to a shaky screenplay.

Hal Jordan is introduced as Tony Stark but without the money. We first see him awakening from a one-night stand, discovering that he is late for a very important flight simulation, which will make or break a government contract. As he rushes to work he coldly leaves the woman in his home to nearly cause a car crash and destroy two planes, which probably cost in the millions to produce, nearly killing himself in the process. He is then chosen however by the ring of a dying purple alien called Abin Sur, to replace him as a member of the Green Lantern corps. These are an intergalactic police force, which harness the green power of will, fighting the yellow power of fear. This isn’t The Dark Knight but then again it isn’t Thor.

Thor managed to take an alien/other worldly concept and make it work by keeping a focused, consistent tone and narrative. Green Lantern on the other hand flips from clichéd, straight faced dramatic moments to “humorous” self-aware dialogue exchanges. The film is both full of outdated dramatic clichés while at the same time trying desperately to try and be hip. The film also manages to be both over and under written, as too much is crammed into the film, with none of it being developed to a satisfactory level. I did not watch Green Lantern expecting depth, emotion or social commentary however I was expecting a solid base for some guilty pleasure fun, neither of which I received.

Ryan Reynolds is an actor whose talent seems to be either unrecognized and/or wasted by Hollywood studios and whoever is advising him. Last year in Buried, Reynolds showed that he could single handedly carry a film, turning in a stellar performance that was worthy of Oscar consideration. While Reynolds pulls off the cocky and heroic aspects of the Hal Jordan character, the dialogue or film never provides him with any moments to let his acting talent shine. Blake Lively is an infuriating presence in this film. While many of my gender (And particularly my age) would cite Lively’s moments as the film’s finest (For reasons not associated with acting talent) like Frieda Pinto in Rise of the Planet of the Apes, her role is literally a sound bite. We are supposed to believe she is both a brilliant pilot and businesswoman but her character serves no other purpose than to provide a forced love interest.

One of the most tired conventions of the super hero genre is this thankless, forgettable female love interest. Natalie Portman in Thor was wasted in such a role and Green Hornet, Green Lantern and Captain America are all guilty of having female love interests who literally serve no other purpose. All these characters are also denied any powers of their own but hey having Cameron Diaz cast purely for her looks isn’t sexist because look, she’s a woman working in middle age! What do you mean Natalie Portman has nothing to do other than be a love interest; she’s an Oscar winner! Plus she’s playing a scientist who we never see do any science! At least in X-Men: First Class, the female characters were part of the superhero shenanigans and weren’t purely love interest fodder.

Blake Lively in this film is a representation of damsel in distress and she has no moments whatsoever of strength. The actor in this film who gives the best performance by a mile and actually elevates the film is Peter Sarsgaard as Hector Hammond. Not only is his character victim to some terrific make-up work (An element of this film which may in fact get it an Oscar nomination and possibly a win) but he also plays his character perfectly, as an over the top, campy, sniveling, pantomime villain.

It is frustrating to see Sarsgaard not given the spotlight he deserved however. The film has two villains, the main one being some black smoke…it worked on Lost but it really does not work here. Not only is this enemy defeated in what feels like thirty seconds, it has no notes of interest whatsoever. Hector Hammond and Hal Jordan should have been the main rivalry of the film. There was plenty to chew on there both thematically and with the narrative. Instead we spent time on a clichéd, been there done that, unrewarding, cringing love story and on the exposition, reminding and defeating of an incredibly uninteresting, unthreatening “villain”

The film’s during the credits sequence also sets up another villain in an act of sequel baiting. This is an action however that like all the actions in the film that preceded it, is not supported by any character motivation whatsoever, everything just happens because it does. In piling on an origin story, a love story, two planets, two villains, an entire new race of aliens we get an incredibly crowded film where no element gets to breath. Every element of the film seems like it has been cut short in order to make way for another element. The film is also incredibly rushed; it doesn’t feel at any point like Hal Jordan has gone on any kind of journey. We get one training sequence (In which Hal gets beaten up and quits) and all of a sudden the next time he needs to use the ring is a pro.

There are numerous plot holes and inconsistencies, which cannot be summarized in any other way than stupid.  Here is a nice list of the plot holes that I can think of, off the top of my head

I know this isn’t a movie to be taken seriously or to put much thought into but the fact that these things were so glaring demonstrates how unsuccessful the film was at diverting my attention away from this. I also know that a few of those aren't exactly plot holes but rather plot questions, either way its plot related.

None of the characters seem to respond authentically to anything at all, when Hal Jordan sees a purple alien his initial reaction is not shock and awe but rushing into save him…what a hero. Again when on the planet of the Green Lantern’s Jordan and all the other characters just take everything in their stride, this is a film full of action and no reaction. It seems as if the characters are as wise to special effects and the superhero film as the audience are. The possibilities of the ring that can conjure up anything are also wasted on incredibly unimaginative action sequences. There is a line when Sinestro mocks Jordan’s training sequence creation with the words “Oh human…” well I think Sinestro would have said the exact same thing watching the film he populates.

Green Lantern is not terrible however. Sarsgaard and Reynolds give good performances. The Hector Hammond stuff is genuinely well done, with some of the best make up of the year. The visual effects are well done, however some things do look incredibly goofy and doesn’t translate to the small screen (I watched this on DVD) The Green Lantern planet is well realized visually but is never explored, imagine if James Cameron had never bothered to show us much of Pandora in Avatar. Geoffrey Rush, Mark Strong and Michael Clarke Duncan give good voice work and the plane and helicopter sequences are well shot by Martin Campbell.

Overall with four writers, Green Lantern is too crowded and cannot find a tone or story to stick to. It’s rushed, heavy on exposition but light on emotion of any kind, over and under written and fails to take advantage of the performers or imaginative concept at hand. Green Lantern is a good watch, it has enjoyable moments and I didn’t hate the film, I was just disappointed that it wasn’t as fun, or as satisfying as it could and should have been. Cut out Parallax, get rid of the holes in the plot and Blake Lively, make Hammond/Jordan the focus and explore the world and concept a lot more and you have a decent film. Or at least one that wouldn’t feel as crowded, rushed and unsatisfying.

Decent effects, make-up and a great Peter Sarsgaard performance cannot make up for this film’s rushed, over and under written, unimaginative muddled and inconsistent screenplay, a missed opportunity.

P.S. I know 5 seems like a high score for a film I effectively spent the best part of just under two thousand words taking apart. However I genuinely wouldn’t mind seeing Green Lantern again, especially on the big screen. I know, it appears I, like the film don’t make any sense. If it weren’t for Sarsgaard this would be 0-4 stuff.

Disagree with this review? Give us your thoughts on Green Lantern in the Your Say section.