Writer: Steve Kloves
Director: David Yates
Starring: Daniel Radcliffe, Emma Watson, Rupert Grint, Ralph Fiennes, Alan Rickman and Helenha Bonham Carter
As you may have heard, the Harry Potter film series, a series that has lasted a decade and become the most successful film series of all time at the box office has come to an end with Harry Potter and the Deathly Hallows: Part Two. Movie Parliament has done a lot of coverage building up to this event, with an article where I wrote about my experiences and memories attached to the Harry Potter series, which you can read by clicking here. As well as online live blog marathon of the first four films, which you can view by clicking here. Deathly Hallows: Part Two is undoubtedly one of, if not the cinematic event of 2011, it is a film that has been a decade in the making and one that arrives with an unprecedented burden of hype and emotion attached to it. Can it live up to these expectations and provide the most lucrative film series of all time with a satisfying conclusion?

The story of Part 2 picks up straight where the last installment finished, with Voldermort now in the possession of the Elder wand and Harry still needing to find and destroy the remaining Horcruxes in order to rid Voldermort from the magic world once and for all. The films opening ten minutes serve as a refresher guide, showing us the final scene of Part 1 again and having characters remind us of what the Deathly Hallows are and restating the stakes. While this scene setting is perfectly fine and necessary given the gap between the two films, when Part 1 and Part 2 are watched back to back, this early scene setting will most likely come off as repetitious and restating the obvious, screen time that perhaps could have been better spent in this films later stages. While you may say this scene setting is necessary for the non Potter readers out there, well, the films have never been shy to alienate those who have not read or do not remember the books before and nothing has changed on that front in this film.

My main issues with Part 2 are issues that a lot of people and more specifically Harry Potter fans will probably let slide as they let themselves succumb to the emotion. However the unbelievable critical praise (the film currently stands at 96% on Rotten Tomatoes) is something that seems to be generated more by the emotion and hype around the film, rather than the film itself. Some of the minor quibbles I had with the film are very minor but important as they took me out of the film. Harry not calling Voldermort by his name in the early stages of the film, when did Harry suddenly become so afraid to say his name? Draco having an unnamed character stand behind him as a Crabbe or Goyle replacement, due to the fact that one of the actors who played one of those characters was caught growing cannabis. Why not just have one character behind Draco? As all the presence of that other actor did was confuse us about his identity and remind us about some certain off screen actor behaviour. Also the comedic one-liners during the battle sequence just seemed completely out of place and took away completely from the epic tone they were trying to create.

For those of you expecting an amazing battle sequence to go down in the ages with this Battle of Hogwarts sequence then prepare to be disappointed. We see the beginning of this battle and we see its after effects but for most of its running time it is reduced to meaningless background action as Harry, Ron and Hermione run around the castle trying to destroy the Horcruxes. After the huge build up, to see the battle become so seemingly meaningless for a large section of the films narrative is disappointing and all the supporting characters who we have grown to love and care for as much if not in cases more than our three main protagonists are barely given any screen time to shine here (Aside from Neville Longbottom of course). The lack of screen deaths for certain characters was also a crushing disappointment to me as never seeing any of these characters die during the battle made it completely lose any sense of danger emotionally. Ultimately the whole Battle of Hogwarts just seemed to be window dressing that lacked any real threat. While you may say that these certain death scenes were not in the book, the films have not been afraid to deviate heavily from the books before and the film should be able to stand on its own separate from the book. It is easier to get away with not showing certain death scenes on paper as you have the freedom to divulge into so much more detail than on film, also in visualizing a lot of the events of the Battle of Hogwarts in your mind, you give it the emotional weight, yet in a film they need to give it to you and I felt the film failed to do that with this battle sequence.

The film is the shortest of the Potter films at two hours and ten minutes, yet oddly I actually wanted it to be longer, yes Deathly Hallows: Part Two actually made me want a Potter film to be longer. It seemed as if we were seeing a cut down theatrical edition and that there is a 15-minute longer extended edition out there, which would have turned this good film into a great one. The film does seem oddly rushed at times and I can imagine those who have not read the books being completely confused by twists in the plot (As I was and I had read the book).

A certain sequence, where a certain character comes back from what seems to be a certain fate (Trying my best not to give away spoilers here) is so poorly explained that it becomes immensely confusing even for those who have read the book. This confusion surrounding this sequence completely compromises the final battle sequence and the film is expecting you to fill in the gaps with information you have acquired from the book and not from the film. For those of you reading who are Potter fans, lets just say that the whole importance of the taking of blood late into the narrative is not mentioned in this film despite it being imperative to why a certain event happens.

One aspect of the novel that everybody will be curious to see on screen is the epilogue. While hardcore Potter fans will most likely be in tears as the end credits role, there is one main problem with the epilogue that took me out of the scene and therefore made me unable to feel the emotions I was meant to. With the amount of money at their disposal and the technology that is available, they could have tried a bit; well a lot harder in making the character looks older. In nineteen years Harry has just got a little bit more facial hair and changed his hair style, Ron has got a little fatter and Hermione is exactly the same, oh and Draco Malfoy now wears incredibly dodgy make up. In the screening I was in, the audience were uniformly laughing making the scene feel much more comedic rather than emotional, a strange way for the series to bow out.

The main flaws with Deathly Hallows: Part Two is that it is a film which moves too fast at times, a film that sells short many potential emotional and character moments due to its rushed nature and one that fails to satisfactorily explain major plot points leading to confusion as the film reaches its dramatic apex. I will now go on to talk about the positives of this film, of which there are many. While this review has been filled with all my negative points so far, this is not a bad film, far from that, however it is the reasons stated above that make me see this film as merely good and inferior to the film adaptations of Prisoner of Azkaban and Deathly Hallows: Part One (A film that I felt was much more emotionally effecting, with a better pace and more interesting visuals than this second part)

As with all the Harry Potter films, this is outstanding on a technical level. Once again the Art Direction shines by Stuart Craig, as does the original score by Alexandre Desplat and the special effects and sound design. Many are discussing this films Oscar chances and while it does not stand a chance in any of the major categories (A truth which Potter fans must come to accept and even embrace as Oscar recognition does not equal being a great film, far from it) however it could sweep the technical categories if the Academy are feeling generous.

The performances in this film are solid and Daniel Radcliffe, Rupert Grint and Emma Watson have all grown as actors throughout the series. However the two best performances in this film undoubtedly come from Ralph Fiennes and Alan Rickman. Fiennes is just superb as Lord Voldermort, he completely embraces the over the top evil nature of the character and along with the fantastic make up and special effects used to bring him to life, creates one of the most memorable screen villains of the past decade. Snape has always been the best and most interesting character in the Harry Potter series and once again Alan Rickman (As he does in every film) steals every scene he is in (I wish we had seen more of Snape’s memories but alas it also fell victim slightly to the films rushed nature).

It is also worth mentioning that this is one of the best films of the summer and is much better and deserves to make so much more money than the trash that is The Hangover: Part Two and Transformers: Dark of the Moon. It is a film with noble intentions, filled with good performances and made with a great deal of care and visual beauty. While I ultimately prefer the more atmospheric and slower nature of Harry Potter and the Deathly Hallows: Part One, Part Two is still a good end to the series. This is a good film but nothing more than that and I feel that in many years when the emotion and hype has died down and we can view the entire Harry Potter film series objectively, time will serve that opinion well. I am not a huge fan of the books and therefore my criticisms of the film are not due to its failings in adapting the book but rather in its failings to stand alone as a film in its most important moments.

Overall The Boy Who Lived will be missed, he is gone but never forgotten and Harry Potter and the Deathly Hallows: Part Two is an oddly fitting conclusion to the Harry Potter film series as it contains flashes of how good the Harry Potter films can be when they are on their best but also how frustrating they can be at their worst. This is a film and a series to celebrate and a story to be remembered. The posters are declaring that “It all ends” but as I said in my Potter and Me article, it is only just beginning. 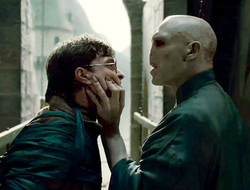 A rushed nature, a failure to stand alone as a film and a lack of emotional heft are the flaws in this technically impressive and well-acted film.

Rating: 6/10 (Originally rated 7+, knocked it down to a six after a second viewing in 3D IMAX and that was being generous)

P.S. The 3D as you would expect is completely pointless and adds nothing. See it in 2D.