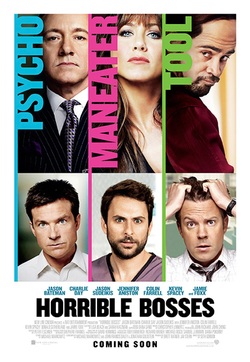 Writers: Michael Markowitz, John Francis Daley and Jonathan M. Goldstein
Director: Seth Gordon
Starring: Jason Bateman, Charlie Day, Jason Sudeikis, Jennifer Aniston, Colin Farrell, Jamie Foxx and Kevin Spacey
2011 has been a rather poor year for the genre of comedy. Paul was a sweet, enjoyable film yet pales in comparison to the previous work of most involved, Bridesmaids failed to live up to the hype and the less said about The Hangover: Part Two the better. Horrible Bosses sets to rectify 2011’s lack of a truly consistent comedy film with a high yet unoriginal concept and a star studded cast that includes comedy regulars Jason Bateman, Charlie Day and Jason Sudeikis, while Kevin Spacey, Colin Farrell and Jennifer Aniston populate the titular horrible bosses of the title.

The premise of this film is simple, yet effective and relatable. Three regular guys, sick of the abuse they are frequently subjected to, decide to kill their bosses. With the idea of a comedy film delving into the darker desires of the human psyche and constructing an elaborate scheme only to see it unravel in a (hopefully) spectacularly comedic fashion, Horrible Bosses is aware of its unoriginality and winningly plays it for laughs. When one of the leads confuses a certain Alfred Hitchcock film with a certain Danny DeVito film, Horrible Bosses deals with its unoriginality in an effective, memorable and witty way, atoning the film of the rarely committed sin in Hollywood of plagiarism.

What makes Horrible Bosses work so well is the chemistry between the three leads. While Jason Bateman is playing his usual smart yet stupid straight man, Jason Sudeikis his sweet yet slimy wannabe ladies man and Charlie Day his squeaky and simple slapstick shtick, all three complement each others forte and are much more relatable, likable and engaging comedic leads than their equivalents in a certain successful comedy sequel that was released earlier this year. A lot of the attention regarding this film however has been on the supporting cast and the bosses themselves.

Like the three leads none of the bosses are stretching their acting ability in any way, shape or form. Of all the performances in the film it is Jennifer Aniston who is actually doing something different, stepping out of the repetitive romantic comedies she has become a poster girl for. However her role, like the other two bosses is really a one joke, one note performance. Akin to the film in general, you felt there was much more they could have done with the bosses given the talent at their disposal. Kevin Spacey pulls off his role to perfection but you feel that an actor of his talent is probably doing this in his sleep. Of all the three bosses it is Farrell who draws the short straw regarding the final cut. The extent of his characters contribution is detailed in the films promotional material. You cannot escape the feeling that either a lot was left on the cutting room floor or that his role was incredibly underwritten.

The most surprising of the supporting performances comes from Jamie Foxx. Two aspects regarding his character provide the film with two of its best jokes, one of which is a foul mouthed running one, while the other a witty way at addressing what is perhaps the most frequent crime committed in a cinema. 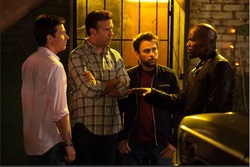 What Horrible Bosses does better than The Hangover: Part Two is that it made me laugh, frequently in fact and what Horrible Bosses does better than Bridesmaids is a have a good handle on its length and pace. Horrible Bosses moves quickly at a brisk 90 minutes (The perfect length for this kind of film) it does not outstay its welcome and refreshingly so given the increasing frequency of comedies with self-indulgent butt numbing length. Like most comedies Horrible Bosses requires a rather large suspension of disbelief. However if you can leave your brain at the door and play with the film on its own terms then you will find yourself having a fun time with this film.

While the film is completely satisfying in a mainstream sense, those who prefer darker, braver comedies may be left disappointed at some of the turns that this film takes. So many times in the film it felt like they were on the cusp of doing something interesting and different only for the film to click back into safe, mainstream gear. With the concept and cast you feel as if Horrible Bosses could have gone a bit further in certain aspects of its narrative. To pinpoint exactly where they missed opportunities would only serve to spoil some of the films more surprising narrative turns, something that should not be done considering how little there are.

The key question to ask when discussing a comedy however is, is it funny? Thankfully the answer in this case is yes. While some of the jokes work better than others, Horrible Bosses is the most consistent comedy in terms of laughs than any film of its ilk so far in 2011. While a lot of comedies tend to lose its laughter in the second half, Horrible Bosses manages to maintain them for its entire running time and does not dissolve into the over the top, action, slapstick that I feared it would.

Its inability to capitalize on its potential means that Horrible Bosses may not stand the test of time as well as it could and the cast are all treading relatively safe water however it is 2011’s funniest and most controlled comedy however given the competition it may have won this title by default.

Summary: Likable leads, consistent laughs and a brisk length make Horrible Bosses a fun film, yet given its cast and concept it could have done more to earn a promotion, as it goes, its certainly worthy of some vice president consideration.

Disagree with this review? Give us all your Horrible Bosses thoughts in the Your Say section.