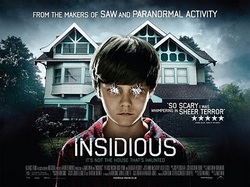 Writer: Leigh Whannell
Director: James Wan
Starring: Rose Byrne, Patrick Wilson and Barbara Hershey
When done right there is no genre more fun to experience in a packed cinema than a horror film. The sight of seeing a full audience jump and scream in terror provides a thrilling adrenaline rush unparalleled by any other genre. Horror films when done right take full advantage of your theatre surroundings, you are sitting in the dark, surrounded by loud sound systems, what other genre when done right can put that situation to such good effect as horror? Unfortunately many modern horror films have failed to take advantage of the theatre surroundings and failed to supply the thrilling yet satisfying moments of terror that fill horror fans with glee, thankfully Insidious is not one of those films and is easily the best, most enjoyable and most satisfying horror film since Sam Raimi’s Drag Me To Hell.

After a family completes their move into a new house they find themselves becoming gradually uncomfortable with their surroundings and when one of their sons Dalton falls into a coma and mother of the family Renai finds herself hearing, seeing and being attacked by paranormal entities they take the logical course of action and find a new house. However they soon learn that it was not the house that was haunted, it is their son (cue dramatic music) While the plot outline of Insidious is far from original the film is still able to provide moments of genuine terror and suspense.

One of the elements of Insidious that is so refreshing is the sheer lack of gore; ironic given that this film is written by Leigh Whannell and directed by James Wan, the duo behind Saw. Insidious is very traditional and old school in its approach of getting scares from its audience, choosing to build up a creepy atmosphere through acting and music rather than to sicken you with excessive amounts of blood. Due to this approach the original score and sound design really stand out with both of them being put to a very chilling and effecting use. There is a moment in this film where I started to sink into my seat ever so slightly, nervous about what was about to scare me next, a feeling that you do not experience watching the latest slasher sequel or Hollywood remake.

While many horror fans have become tired of the “jump scare” the main reason for this fatigue is due to its ineffective use in sub par horror films, mainly in service of the “fake scare” where a loud noise is heard or a character jumps into the frame and it just turns out to be the neighborhood cat or the best friend character. In Insidious however there are no fake scares and every scare in the film is a legitimate threat.

The acting in this film is also of a surprisingly high quality for a horror film. Actors and actresses in horror films are usually stereotyped as dull and stupid teens who are merely there to get killed. However by putting two solid actors in the lead roles of the parents in the from of Patrick Wilson and Rose Byrne (Who is having a great 2011) it gives the film an emotional credibility as you believe them as parents struggling through an incredibly traumatic period in their lives.

Many have claimed that Insidious is a film of two halves and while tonally that may be true, I do not find the division in style across the film to be as intrusive as many others have insinuated. The first half of the film is what Paranormal Activity should have been and the second half of the film is what the Haunted Mansion should have been. Using those two films as examples you can sense how the film changes stylistically half way through the narrative, a change which showcases some of the best art direction of the year so far.

The design of “The Further” is something that is crying out to be turned into a real life haunted house attraction (Something I would probably be too scared to walk through) Whether it be the demons lair, the spooked out house or the moments of sheer darkness, the whole experience of journeying through “The Further” opened the film up visually and made it more inventive in that department than most if not all recent horror films coming out of Hollywood.

The fact that James Wan was able to provide such atmospheric thrills, believable performances and great production design on what is a minuscule budget when it comes to filmmaking (1.5 million dollars) is an achievement that horror filmmakers and movie studios should take note of. You do not need big special effects, big stars or buckets of gore to make a great horror movie. What you need is good actors, a chilling score, a simple premise and somebody who understands how to build a genuinely suspenseful atmosphere and provide moments of sheer terror.

Insidious evens provides moments of humour with the Ghostbusters esque duo who significantly lighten some of the proceedings (Although not at the expense of the horror) There are so many great scenes and scares that make Insidious such a thrill however to spoil them would be ruining the surprises that the film has in store. The film is not perfect however and does have its flaws, more so if you are hardened horror fan. The story is far from original yet that does not severely affect the film due to the way the story is told however the film does take a little while to get going. I like a slow build of terror in horror films don’t get me wrong and while I appreciate the film taking its time with the characters it did take a while to really get going in the scares department (but when it does, it does not let up)

Also there are two main twists to the film, one that is rather obvious to call if you a genre fan paying attention and one that genuinely surprised and terrified me, giving way to what is perhaps my favourite ending of 2011 so far. While I did love Insidious, I feel like it is being slightly overrated in some quarters with some calling it the scariest movie of all time, leaving me with a ever so slight tinge of disappointment when I saw the film just because it wasn’t unbearably terrifying. These are minor quibbles however in a film that showcases why I love horror cinema when it is at its best. If I had watched this for the first time in my room, at night, with headphones in I may have found it very hard to sleep that night and it is a feeling I hope I get when I watch this movie again on Halloween (and perhaps every Halloween after that in a triple bill with my two favourite horrors of all time, Scream and Drag Me To Hell)

As every review has mentioned it can be argued that we see a bit too much of the demon in the final act however I found all the moments it was on screen to be either terrifying or chilling and yes, he does look like Dart Maul and with a hint of Freddy Kruger in one scene.

Thinking about moments from this film when I went to sleep the night I saw it, gave me slight chills and this is a film that if you let it, don’t go in to cynical, see it in the right conditions and embrace what it is, can provide you with one of the best cinematic experiences of 2011 so far. In the screening I saw the film in, there was a group behind me who seemed to approach the film at the beginning in a very cynical, comical way but by the end they were jumping with the rest of the audience and even let out a manly scream or two.

Overall Insidious through a combination of a fantastic score, great sound work, a superbly crafted chilling atmosphere, terrifying scares, good acting, inventive production design and a knockout of an ending provide one of the most enjoyable and satisfying films of 2011 and the most enjoyable, satisfying and terrifying horror film since Drag Me To Hell, a must-see for fans of horror who have become disillusioned with modern Hollywood efforts. While I got a huge kick out of Scream 4, it never really scared me, made me jump or gave me that post screening chill, all of which I got out of Insidious, giving it the title of scariest movie of 2011 so far. 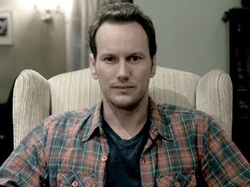 Summary: It’s not perfect and the more of a horror fan you are the more you can anticipate certain scares and twists in the plot, however Insidious is a well acted, brilliantly made, satisfying and incredibly enjoyable horror film.

Disagree with this review? Give us all your thoughts on Insidious in the Your Say section.