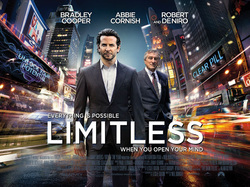 Writer: Leslie Dixon
Director: Neil Burger
Starring: Bradley Cooper, Abbie Cornish and Robert De Niro
What if a pill could unlock 100% of your brain potential? That is the question behind Limitless a high concept mystery thriller starring Bradley Cooper, Abbie Cornish and Robert De Niro. Directed by Neil Burger, Limitless focuses on Eddie Morra, a down on his luck writer who cannot finish his book, cannot pay his rent and cannot keep his girlfriend. A chance meeting with his past brother in law leads him to discover NZT, a drug that allows Eddie to finish his book, get his girlfriend back and make millions on the stock market, however Eddie is not prepared for the deadly side effects of NZT.

When I reviewed The Adjustment Bureau, I commented on how it was an old school science fiction film in the sense that it relied on its concept and characters to provide the entertainment rather than constant fight scenes and explosions. While Limitless contains more action scenes than The Adjustment Bureau, it is in the same vein as a film that has a singular and engaging high concept and keeps you hooked through the strength of its concept and its cast. Bradley Cooper is an actor who has long been a supporting player, in Limitless he is finally the leading man and shows that he may have that position for many films to come.

As Eddie Morra, Bradley Cooper is completely believable and is able to successfully carry this film with a performance that is neither wooden nor too showy. Beyond Bradley Cooper the rest of the cast do not have substantial screen time or a memorable presence. Robert De Niro plays his part well and while we are not talking about a Taxi Driver level performance, Robert De Niro on autopilot is still able to dominate the screen in a way that many actors cant at their best. The surprising star of the show however is director Neil Burger, who infuses this film with a style and energy that perfectly complimented its story. In the early non NZT scenes the film is shot in dark and grey tones, as soon as Cooper pops the pill however the screen lights up and letters fall out of the sky.

There are many visual touches and visual flourishes throughout the film that really help elevate it and make it a much more visually stylish film than one would expect. The film would not work however if you were not keen to learn what happens next, fortunately for the audience Limitless is consistently engaging and there is never a dull moment. While movies such as Trainspotting have explored the euphoria of drugs and the dangers of addiction in a much darker, grittier and better way, Limitless does a good job of portraying both Morra’s meteoric rise as well as his sickness induced fall. In fact it is the second half of the film, where the dangers of NZT become apparent, that the film really clicks into gear and provides the protagonist and audience with genuine threat and intrigue.

Limitless is not perfect however. The villain of the piece is a rather stereotypical and one note character and one cannot help but think that the medical dangers of NZT or Robert De Niro’s character (the fantastically named Carl Van Loon) would have made better antagonists. Also the character of his ex wife Melissa could have easily been cut from the whole film, as the characters only purpose is to come and explain something that had already been established and could have been better explored by our protagonist experiencing it rather than being told about it. The films ending is also a bit too convenient, a bit too safe and a bit too light and while it is nowhere near as cheesy or as predictable as the ending to The Adjustment Bureau, it does seem like a bit of a cop out. 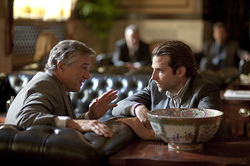 While flawed and nowhere near perfect, Limitless is an engaging, enjoyable, stylishly directed and well acted film that although never reaches the heights it could given its premise contains enough invention, visual flourishes and fun to be one of the better release of the year.