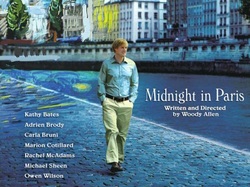 Writer and Director: Woody Allen
Starring: Owen Wilson, Rachel McAdams, Marion Cotillard, Kathy Bates and Adrien Brody
While visiting his parents-in-law in the French capital, Hollywood writer Gil Pender surely did not expect he would magically be transported back in time to meet his idols: artists of Paris in the 1920s.

Woody Allen delivers another witty comedy, where a bunch of wealthy people struggle to find meaning and satisfaction in their well-ordered life. His new film evokes a Parisian mash-up of "Match Point" (a man vs his in-law family and fiancée) and "Vicky Cristina Barcelona" (the American look towards Europeans).

As Gil the writer, Owen Wilson is truly convincing. He manages to express the wide range of his character's expressions (from bewilderment to joyful amusement), not only using the brilliant lines of Allen's script, but also with his full gesture and body. This may be his best performance since "The Darjeeling Limited". In addition to Wilson, the whole supporting cast is equally brilliant: Kathy Bates, Rachel McAdams, Tom Hiddleston (Loki in "Thor"). Corey Stoll is a revelation, while Adrien Brody literally steals the one scene he appears in. I should not say more in this regard, as a big part of the film's pleasure is that it takes you from one surprise to another.

Like if he wants to get rid of them as soon as possible, the film starts with a series of clichés, then totally avoids them until the very end (which in fact may be a wink to the audience, I let you tell me what you think). "Midnight in Paris" is a refreshing look at the ideal Parisian bohemian lifestyle, the life we dream of and the illusions of the past.
As he attempts to write its first novel after years of shallow screenplays, Gil first looks for answers and advice, but he soon realizes the importance of his own will and talent. The film's depiction of the role of an artist and the necessity of art definitely striked a chord with me. Like a little miracle, the film succeeds in being simultaneously nostalgic and down-to-earth, magical and realistic. It is a lovely reverie, for the years to come. 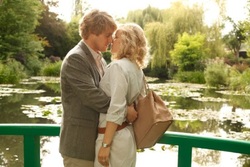 An exquisite, well-acted comedy, full of surprises and tenderness.


Disagree with this review? Let us know your thoughts in the Your Say section.