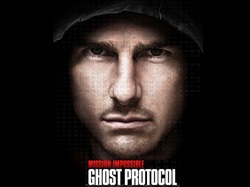 Writers: Josh Appelbaum and Andre Nemec
Director: Brad Bird
Starring: Tom Cruise, Jeremy Renner, Simon Pegg and Paula Patton
Imagine a Brosnan Bond era inspired, Infinity Ward produced, Apple advertisement and you have Mission Impossible: Ghost Protocol. Directed by Brad Bird (The Iron Giant and The Incredibles) this fourth entry in the spy/action franchise sees Ethan Hunt and his team on the run as they attempt to clear their organization’s name from an attack on the Kremlin. With a larger role for Simon Pegg, a whole new role for Jeremy Renner and the live action directing debut for Brad Bird, there was a lot to look forward to with this film, sadly all its satisfaction comes from the more superficial elements of its slight yet contrived story.

Most of the advertising for this film has focused on THAT scene on THAT tower. This heavy focus on that scene and the IMAX format that undoubtedly makes it truly flourish (I saw the film on a normal cinema screen) is apt due to the fact that it is the film’s high point literally and metaphorically. As Tom Cruise does his Spiderman routine and Bird’s camera lingers uneasily over the edge, it is the only point in the film, which evokes true excitement and intensity. The rest of the film’s action while well done and providing plenty of bang for your buck can never reach the heights set by this sequence.

Another scene expertly done is one in which the characters of Simon Pegg and Tom Cruise have to creep their way down a hallway using a very flashy piece of IMF gadgetry and of course, an Ipad. This scene along with the exploits in Dubai truly captures that intense, edge of your seat thrill and does so silently. It is when Ghost Protocol tries to live up to the first word of its subtitle that it truly stands out. The main flaws of this fourth film stem from its very core, a plot that is slight and silly even for a Mission Impossible film. This is 24 series eight stuff here and incredibly disappointing when you consider just how involving the story for Mission Impossible 3 was (J.J. Abrams a producer for this film, should have been part of the writing team)

It’s a story that belongs in a Call of Duty game, as the U.S. good guys attempt to stop the Russian bad guys from causing a nuclear war. It is highlighted early on in the film that tensions between the countries haven’t been this high since the Cuban Missile Crisis, yet the writers nor filmmakers seem keen on replicating that time of political and espionage tension, with all the films exploits seeming to take place inside this bubble which is more jarring than it normally would be considering its genesis. The film’s villain is also incredibly poor and is not fleshed about beyond a name and incredibly brittle, stupid, unexplored motivation. If you’re going to have an underdeveloped villain with an unclear motive at least do what Mission Impossible 3 did and cast somebody like Phillip Seymour Hoffman.

The fact that such a weak story forms the basis of all this action made it hard for me to ever fully engage with the material. As the car chases and shoot-outs were leaving their usual path of destruction, for the whole movie I felt this nagging feeling that I should be enjoying it more. In that sense this film is oddly comparable to my thoughts on Tintin and how the fact that, that film’s relentless action was built on nothing made it a rather numbing experience and a chore rather than a joy to watch. Mission Impossible: Ghost Protocol never becomes a chore however as Bird’s well done action sequences and the performances manage to keep this film afloat and just stopped me from sinking into true boredom.

Simon Pegg’s comic relief character is nowhere near as annoying as he would be in other hands and believe it or not actually provides genuine comic relief. Although as a Hot Fuzz fan it would have been nice to see him given more Nicholas Angel moments. Jeremy Renner’s character has an interesting connection to the character of Ethan Hunt which I wish had been developed a bit more and he pulls off all the action stuff well but is really a character stuck in limbo between Benji and Hunt. Meanwhile Paula Patton does the obligatory tough yet obviously cast for her looks Mission Impossible female role as well as you would expect.

Brad Bird demonstrates that he can do live action as well as animated direction as all the action scenes are filmed efficiently. He avoids shaky cam and instead offers a clean view of the action, never completely overawing the audience. I have a feeling that with a better story these action sequences could have shined a lot more than they did, with the impressive stunt work falling victim to what was causing and driving it. The product placement in this film is also much more obvious than it was in any Mission Impossible movie in the past as Jeremy Renner’s character sets a stopwatch with an Iphone and then lays against the back of a Macbook Air. It does make you wonder just how much money Apple put into this thing.

The film could have done with being a bit shorter and while it wasn’t a butt numbing length, a film with a slight story such as this exceeding two hours is unforgivable. I know that with these kind of films one suspends disbelief, turns the brain off and enjoys the action but on that basic level aside from a few stunning sequences Ghost Protocol doesn’t entirely succeed as dumb fun. Dumb fun is only fun when it’s either really dumb or has a solid framing of basic IQ to support it, Ghost Protocol has neither. This review is ultimately harsher than I felt while watching the film and it is very much an in one ear out the other experience. It’s not objectionable, is flashy, shiny and action packed enough to be entertaining, has solid performances leading it, some cool ideas and a director at the helm who can keep things visually more interesting and fun than what is on the page.

If you want to experience Ghost Protocol properly than see it in IMAX and walk out after the Dubai tower sequence. If you want to experience it for free then you could just play Call of Duty while watching a Brosnan bond movie and listening to your Ipod. If you want the best of what this series and even this genre can offer though, check out Mission Impossible 3. Tom Cruise, your mission should you accept it is to next time find a story that can match your director, the memory of this film in my mind will self-destruct in 3...2...1... 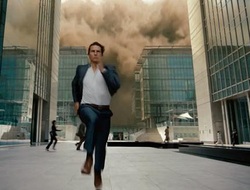 By Movie Parliament Prime Minister,
Michael Dalton
Disagree with this review? Give us your opinion in the Your Say section.