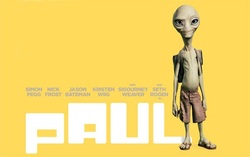 Writers: Simon Pegg and Nick Frost
Director: Greg Mottola
Starring: Simon Pegg, Nick Frost, Seth Rogen, Kristen Wiig, Jason Bateman and Bill Hader
Hot Fuzz and Shaun of the Dead were two of the best comedies of the past decade and in this reviewer’s opinion two of the best comedies of all time. This time Simon Pegg and Nick Frost have written and starred in their own film, away from the co writer and director of their previous two efforts, the genius Edgar Wright. This time Greg Mottola, director of Superbad and Adventureland takes the helm as Pegg and Frost star as two British, America traveling geeks who have a close encounter, with the Seth Rogen voiced alien, Paul.

As a fan of their previous work but more strongly a fan of Edgar Wright, I was worried whether Paul would be able to live up to the high standards Pegg and Frost have set for themselves. I should not have worried; as Paul is the most fun I have had in a cinema this year and has set the standard for comedic films in 2011. While nowhere near the heights of Shaun of the Dead or Hot Fuzz, Paul is a thoroughly enjoyable and consistently funny film that had me genuinely laughing out loud from start to finish.

While there is no denying the films silliness, I doubt whether another comedy this year will be as enjoyable as Paul. While the films opening seemed to be confirming my earlier doubts, as soon as Paul arrives on screen the film really starts. At the center of Paul, as it is in all their movies is the chemistry between Simon Pegg and Nick Frost. These two know each other and seem to have a telepathic comedic connection that is evident through every second they share the screen together. In this film, like Shaun and Fuzz there is a whole host of comedic talent to provide laughs, Jeffrey Tambor, Bill Hader, Jason Bateman, Kristen Wiig, Joe Lo Trugilo and Sigourney Weaver all lend a helping hand to what is a fine comedic ensemble.

One of the joys of watching Simon Pegg and Nick Frost is that they are people making movies who clearly love movies. While Shaun parodied the zombie movie and Hot Fuzz the buddy cop action movie, Paul is a big love letter to sci-fi movies. From references to Predators, E.T and Close Encounters of the Third Kind to Empire Strikes Back t-shirts and a genius use of a famous quote from Aliens, Paul is a treasure chest of in jokes for those who love their sci-fi movies as much as Pegg and Frost do.

Unlike Rango however, you never feel that Paul is too self referential for its own good and while there are plenty of jokes to please the hardcore sci-fi fans, Paul is also accessible to a mainstream audience with many scenes that will have people either shaking their head in disgust or laughing their heads off. Speaking of shaking heads in disgust, Paul isn’t exactly subtle in its search for humour. Lets just say that three tits and alien balls are both recurring jokes in the film. Paul is not just sick humour however and there are many simple lines that actually provide the films biggest laughs with a particular dialogue exchange about coffee, bagels and tea being one of the best examples of this. It is also worth noting that despite some of its rude and at times controversial humour, Paul is at times genuinely charming and by the time the end credits roll you are bound to have a smile on your face.

As for the character of Paul himself, he is everything you would expect him to be from the promotional material. He is rude and completely charismatic. I would not be surprised if Paul t-shirts and action figures were being sold at this year’s comic con. While Paul as stated is no Shaun of the Dead or Hot Fuzz and cannot be argued as a great work of cinematic art, it is probably the best comedy movie I have seen in a while (certainly better than any comedy released in 2010) and is the most fun I have had in a cinema since Piranha 3D. If you are a fan of sci-fi films or a fan of comedy films then you should definitely check out Paul. Plus its got Electric Light Orchestra on the soundtrack, one of the best Alien ship landing gags in film and a last line that practically reviews the whole film. Its not perfect, however I have a theory that if a comedy makes you laugh enough (which this one certainly did) then you can forgive its flaws as it has achieved what it set out to do. 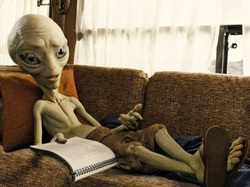 While not as visually layered as Shaun of the Dead and Hot Fuzz, Paul is a satisfying, entertaining and hilarious comedy that has set the bar for comedic films in 2011 and set it high, this is the most fun I have had in a cinema so far this year.