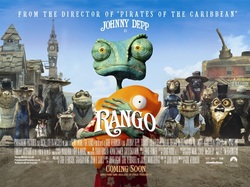 Writer: John Logan
Director: Gore Verbinski
Starring: Johnny Depp, Isla Fisher, Ned Beatty, Alfred Molina, Bill Nighy and Ray Winstone
Animated films have become a huge genre in the film industry, with likes of Pixar and DreamWorks dominating the market, providing films that have been both critical and box office hits. Now ILM, also known as Industrial Light and Magic have thrown their hat into the animated ring with Rango, a film about a Johnny Depp voiced chameleon who lies his way into being the sheriff of a parched town named Dirt.

Rango is a very odd film considering the type of film that it is, for an animated film surely aimed at the family market, Rango’s biggest admirers may be found in the older rather than younger demographic. The main reason for this is that Rango tips its cowboy hat to not only many famous westerns but also many famous films in general. From a dream-induced appearance of a “Man with no name” to tumbleweeds and stand offs, Rango is a western film. The western is a genre that I have yet to receive a great film from (I have not seen Unforgiven and the Good, the Bad and the Ugly however) with my favourite western experience coming from Rcokstars superb game Red Dead Redemption.

The main strength of Rango is how it looks. This is a gorgeous film and in terms of the animation is one of the visually finest animated films I have ever seen. Beautiful desert shots and sunset scenes make Rango an early candidate for the best-looking film of 2011. The films “cinematography consultant” is Roger Deakins. Deakins is something of a cinematography legend and it is no surprise that the film looks so great with his consultancy. In fact the film looks much better than True Grit, Deakins other recent western offering. The music in the film is also fantastic with Hans Zimmer once again showing why he is one of the finest composers in the film industry.

The voice acting in the film is also terrific with Johnny Depp doing a good job voicing the titular chameleon. The best voice work however is provided by Ned Beatty and Bill Nighy as the villainous Mayor and Rattlesnake Jake respectively. Rattlesnake Jake is the films finest creation and is a genuinely threatening and intimidating presence. The film has a warped sense of humour and as previously mentioned contains a lot of references that will fly over the heads of young children. Saying that, there is enough slapstick and inventive visual humour to entertain both young and old.

Watching the film, admiring its visual beauty and off beat nature, I realized this was a film that I admired more than I enjoyed. The film is much longer than it needs to be and is oddly rather dull in parts. The film also comes off as slightly pretentious and sometimes a bit too clever and referential for its own good. Rango is not a bad film by any means, however I do not think it is a film that will be enjoyed in years to come. It is nowhere near as funny as it could and should be and does not contain the emotional weight of some Pixar offerings. Comparing any animated film to Pixar’s level is slightly harsh however and Rango does succeed in being a beautifully animated and offbeat film. The fact that I did not enjoy to its fullest seems to be purely down to my tastes, as the packed screening I saw the film in, contained audience members who were laughing all the way through.

Rango does comply to some formulas however and the love story element of the film doesn’t work at all, it is poorly developed and feels tacked on rather than a key element, it was a film that did not need a love story and the kiss scene was the films most mainstream moment.

Overall while I admire Rango for its visual splendor and offbeat nature I was never gripped or engaged with the film enough for me to truly enjoy it. Visual invention, a great soundtrack, neat touches here and there (which I shall not spoil) and the villains, make up for the fact that Rango is pretentious, too referential for its own good and too long, with characters and a story that will not live long in the memory.

Beautiful yet pretentious, off beat and overly long, Rango is a film to admire rather than to love and ultimately to forget.