Writer & Director: Kevin Smith
Starring: Michael Parks, John Goodman and Melissa Leo
Three teenagers looking for sex, a group of crazy homophobic, racist Christian fundamentalists and some trigger happy, human rights denying government agents…where does Kevin Smith get his ideas from? Red State is an unpredictable, crude, gory and satirical film, which provides a compelling argument for the separation of church and state.

Red State has been largely overshadowed by the way in which Kevin Smith chose to distribute it. At this year’s Sundance Film Festival, Kevin Smith (The film’s writer, director and editor) stated that he would choose the films distributor following a screening of the picture, auction style. Immediately after the commencement of bidding, Smith bought the rights from his producer John Gordon for twenty US dollars, following a rant about the art crushing absurdity of modern film distribution. Instead of believing in Hollywood’s procedure of film release, Kevin Smith has taken his film on tour or “direct to fan” as the company line states, attending screenings and answering audience questions. Whether his release platform is a financial success and will inspire independent filmmakers in the long-run is a discussion which cannot accurately be had at this moment in time, however we can discuss what is perhaps the outlier in Kevin Smith’s work to date.

Red State starts as what seems to be a satirical sex comedy, with three teenagers pursuing a threesome, which has been arranged over the Internet. When arriving at the agreed location however they ultimately found themselves drugged and awaken tied up and under the control of the Trinity Five Points Church, a fundamentalist group whose actions and opinions are so extreme, that even Neo-Nazis have distanced themselves. Just when you think Red State is then going to follow a traditional horror movie formula it switches gears yet again and becomes a siege film with a third act that is constantly supported by the sound of bullets firing. Its conclusion is then a full on political satire in the vein of the Coen Brothers, Burn After Reading.

With what seems to be three different films in one piece (The end credits even split the cast list into the sections, “Sex”, “Religion” and “Politics”) an argument can be made that Red State lacks focus and a solid centre. However these sudden tonal and genre shifts are nowhere near as jarring or as off-putting as they may sound on paper and in fact these elements mesh together quite well even if you feel as if none of them take centre stage or go to the lengths or depth that they could. Red State’s biggest flaw is infact the pacing as for a ninety-minute film; it does drag slightly in the middle.

One of the more memorable yet also self-indulgent scenes in the film is a fifteen-minute monologue in which the head of the Five Points (Played by Michael Parks) vents about the wickedness in modern America. While this scene showcases the superb performance that Michael Parks gives in this film and has some superb dialogue from Kevin Smith, you do feel that it could be a little shorter as its length slightly dilutes its initial effect. Michael Parks however is this films shining performance and steals every scene he is in. He emits a chilling charisma that borders on charming despite his creepy and crazy nature. Oscar winner Melissa Leo also gives a great performance however it is one that descends into much less subtle mental disorder than the character of Michael Parks.

Kevin Smith as a director has never really been perceived as an “auteur” and as somebody who had never seen a Kevin Smith in its entirety before this, from the reviews and representations of his films in various media, I have come to think of his films as more impressive and memorable on a verbal rather than visual front. However in Red State, the low budget and perhaps the RED camera as well as the grime of the setting and the material seems to have given Kevin Smith a burst of kinetic, camera creativity. His jump cut editing and Requiem For A Dream style fixed camera shots of people running forward, give the film a dynamic visual quality that complements the material.

While I would not define this as a horror film there are moments here that suggest that if Kevin Smith wanted to make a film that was purely horror then it would be worth a watch. There are sequences in this film (mainly chase orientated) that have you right on the edge of your seat and the brutal, clinical, yet realistic way in which many of these scenes are brought to a close is representative of the swift, messy nature of the films edit. The subject matter has inherently disturbing aspects to it, such as the way in which little children are born into and manipulated by powers above them, spewing misguided extremist philosophies that the young either accept through naivety or fear. However you feel a much better film could be made exploring these communities than this one.

While Parks and Smith impress, what makes Red State one of the better films of this year is the fact that is probably the most unpredictable film I have seen all year, you cannot predict where this one is going unless you have read reviews that go into more detail regarding the film’s conclusion. Despite my slight issue regarding the pacing, the film does keep you on your toes with the fact that its tonal shifts keep you guessing and therefore engaged. What really won me over with Red State however is the films conclusion, as while I enjoyed the dialogue, directing, crude humour, horror, action and the performance of Michael Parks, the satire of the conclusion was a perfect ending note even if it was completely out of step with the style of the rest of the film.

Watching the final scene I was prepared for the film to end on an ominous note, however out of nowhere comes the films final line and I was laughing for a good thirty seconds into the credits, such was the surprise of the line yet also the simple genius behind it…easily the years funniest final line and perhaps what is in context, one of the funniest of all time.

Overall Red State is a film made great by a chilling Michael Parks performance, a surprising visual dynamism, genuine unpredictability and a superb conclusion which actually has what is a surprisingly sound and intelligent message behind it. People do crazy things when they flat out believe… 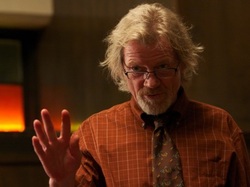 A refreshing unpredictability, a charming yet chilling Michael Parks performance, moments of genuine tension and disturbance and a witty denouement make Red State one of the more memorable and distinct films of this year.

Disagree with this review? Give us all your thoughts on Red State in the Your Say section.