Writer: Kevin Williamson
Director: Wes Craven
Starring: Neve Campbell, Courtney Cox, David Arquette, Emma Roberts, Hayden Panettiere, Erik Knudsen and Rory Culkin
Fifteen years ago audiences across the world were introduced to Scream, a film that revitalized horror movies and provided a self-reflexive and ironic humour that made it genuinely witty and unique. Two years ago, this reviewer was introduced to Scream and a Scream fanatic was born. I have watched Scream countless times and it is not only my favourite horror film but also one of my favourite films of all time. As a film fan and a fan of the horror genre it was a joy to see a film that embraced and critiqued the rules and conventions of the horror movie, with characters such as Randy even explaining the rules to such a film. Now in 2011, after an 11 year wait Ghostface is back and ready to comment on a new decade of horror and kill a whole new host of victims. What’s your favourite scary movie?

Going into Scream 4 I had incredibly high expectations and huge sense of excitement. This was my first viewing of a Scream film in a cinema and as soon as the film started I got a buzz of enthusiasm that no film has given me for quite a while. Sitting in the theatre the audience I was with made me feel like I was watching a Stab rather than Scream film and while I felt like quoting a particular character at the start of Scream 4 who says “Just shut up and watch the movie” over the course of the viewing experience it became apparent that this was the perfect audience to view this film with. When there was a jump, they really jumped, when they screamed they really screamed and when they laughed they really laughed.

Did Scream 4 disappoint? After all these years of hype was it able to live up to expectations? Thankfully the answer is yes, as Wes Craven and Kevin Williamson have delivered the best Scream sequel. The story of this film revolves around Sidney Prescott returning to Woodsboro to promote her new book, Out of Darkness. While there murders start happening again and a whole new generation of Woodsboro teens have to deal with Ghostface, a killer who aims to be more terrifying than Courtney Cox’s plastic surgery.

One of the great joys of a Scream movie for me personally is the way in which it winks at the audience and embraces the fact that it is a dumb horror movie. Ever since the opening to the original Scream, the Scream series has become famous for its opening sequences. The opening sequence to Scream 4 is arguably the funniest and most unpredictable opening sequence in the series and the best opening sequence since the original Scream. With references to Saw, torture porn and the slew of Hollywood horror remakes Scream 4 continues to poke fun of Hollywood horror. While some may finds its constant references and self reflexive humour to be a self indulgent drag, I find it witty, hilarious and something that makes the Scream series unique and as much fun as it is.

It seems however that Scream 4 is much more of a comedy than it is a horror. For me the “scares” were all predictable and I never felt truly threatened or on edge at any point in the film. After four films, it does seem like Screams scares have become about as predictable as the horror conventions it gleefully mocks. However that may have something to do with the fact that I am a hardened horror and Scream viewer as the person I went with was constantly covering their eyes. What it may lack in terror it makes up for in invention, both with its humour and with its death scenes all of which are very well done.

The lack of true terror is not the only flaw with Scream 4. During the middle section of the film it does drag slightly. With the introduction of the new young cast Sidney, Gale and Dewey are not as prominent as they were in other films and while Williamson and Craven found a right balance in terms of screen time for the young and old cast members we never feel like Scream 4 is anybodies journey. The first three films were Sidney’s journey, however this film with its large ensemble did not seem to have that same focus, in terms of which character was the true protagonist.

During production there were rumours of unrest in the Scream 4 camp due to changes to the script, which dramatically cut screen time, leading to certain actors walking out. Ehren Kruger (writer of Scream 3) was brought in for re writes and this seems oddly apparent throughout the film. It sometimes seems that certain scenes, lines of dialogue and characters are not coming from the same voice. Characters who seem more important have smaller screen time and many intriguing shots from the trailer are not evident in the film. This meddling gives the effect that Scream 4 is a slightly unfinished film.

A final flaw with Scream 4 is the way in which the ending is dragged out, with a final set piece that is silly (the characters say so themselves) and also bottles what could have been a more interesting and darker conclusion (more coverage of this in my spoiler filled story review) While many moments in the film are unashamedly silly and certain aspects of the plot may not stand up to scrutiny, the Scream films have always been silly and that is part of their charm.

Despite those flaws, Scream 4 is along with Paul the most fun I have had a in a cinema this year. Neve Campbell, David Arquette and Courtney Cox Arquette all play their roles well however it is the young cast who are surprisingly good. While they are all clearly younger, newer versions of the characters we saw in Scream, I did not feel like there was one bad performance in the film and at no point where any of the characters annoying (well maybe Sidney’s publicist) The three standouts among the young cast are Emma Roberts as the young Sidney, I mean Jill…Sidney’s cousin, Hayden Panettiere as Tatum, I mean Kirby, Jill’s best friend and Erik Knudsen as Randy, I mean Robbie a film obsessive who films his whole high school experience to upload onto the internet.

As with all Scream films, the film works effectively as murder mystery and red herrings are thrown in every single direction to keep the audience guessing. Without giving too much away, the reveal of the killers in this film is arguably the most shocking twist in the series and looked like it was taking the series in a very brave direction (more on that in my spoiler filled story review) speaking of brave, Scream 4 is the film where the Scream films got their guts back (almost, more of that later in my…you get the picture) the film makes an incredibly brave and bold decision regarding its characters considering what they are aiming to do with the franchise.

Overall Scream 4, while not perfect is the best Scream sequel, with witty self-reflexive humour, a hilarious and brutal opening sequence, inventive death scenes, great performances all around and one of the most unpredictable conclusions in the series. Ghostface is back and while critics may be whining and box office dwindling, you will not get a more inventive and enjoyable fourth installment in a horror franchise and I would be more than happy to queue up for Scream 5. If that day does not come however, while Scream 4 may not offer the nice conclusion of Sidney’s character that Scream 3 did, it is still a noble end to what is in my opinion, horrors best and most consistent franchise. 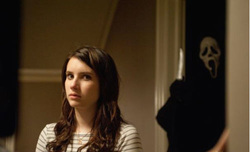 Too flawed to reach the greatness of the original but an inventive and enjoyable film, the best fourth installment in a horror series ever.