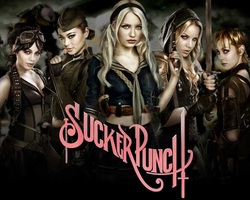 Writers: Zack Snyder and Steve Shibuya
Director: Zack Snyder
Starring: Emily Browning, Vanessa Hudgens, Jena Malone, Abbie Cornish, Jamie Chung and Oscar Isaac
Sucker Punch tells the story of a young girl referred to as Baby Doll, who is locked away in a mental asylum by her wicked stepfather after the accidental murder of her younger sister. In the mental asylum she retreats into a world of her imagination in order to deal with the horrors around her. Teaming up with the other inmates of the asylum Baby Doll may just be able to escape.

Directed by Zack Snyder, Sucker Punch is an incredibly visual film. Snyder gave us 300, Dawn of the Dead and the criminally underrated Watchmen. Snyder is a director who does a lot of things that other director’s can’t or wont do, make a film loaded with stylish and memorable images and sequences. The opening to Watchmen is in my eyes one of the greatest opening scenes of all time and Snyder has a Tarantino like way of marrying songs with images to create superbly done scenes. The opening to Sucker Punch is another example of this talent that Snyder possess, with a creepy rendition of Sweet Dreams providing us with the background to the struggle of Baby Doll.

I infact may have a deeper appreciation of Snyder’s directing style than most for two reasons. I don’t mind watching other people play video games and when I listen to music I imagine movie scenes to accompany them, therefore the video game/music video nature of this film that has resulted in much hate from the critics does not bother me as much.

The first fifteen minutes of Sucker Punch are in fact the best fifteen minutes of cinema I have seen in a movie theatre so far in 2011. Its memorable, it sets up the story perfectly and is visually dynamic. Once Baby Doll begins her quest in the fantasy sequences is when the film starts to fall apart. The main problem with Sucker Punch is that Snyder didn’t have a strong enough co writer to help him reign in all his visual creativity in order to apply it to a more coherent story. If we have learnt anything from Sucker Punch it is that Zack Snyder belongs behind a camera and not in front of a typewriter.

The film is never dark or gritty enough to make us truly emotionally connect to anything happening on screen. While Zack Snyder claims he wanted a PG-13 rating from the beginning, one cannot help but think that if Snyder were allowed to make a darker film, then the experience would be greatly improved. The fact is we never truly fear for Baby Doll because we never truly see the horror she is subjected to. While the films many action sequences are well done from a technical stand point, they end up becoming derivative and dull due to the fact that there is no real chance of pain for any of these characters, the threat is never palpable.

It doesn’t help that all of the actors seem to be campaigning for razzies. I don’t like to criticize actors too much as I know that I could never turn in a great performance however one cannot help but notice the lack of acting ability in this film. Oscar Isaac is the only actor who comes out of this film with his head held high. As Blue, Oscar Isaac creates the only truly menacing element of this film. Emily Browning is decidedly wooden in the lead role and lacks the charisma to really make Baby Doll a character we can root for or relate to.

Many have slammed Sucker Punch for its lack of a story, while others have praised it for its depth and complexity. If you ever read or watch a Zack Snyder interview it sometimes seems as if he is not the most articulate of fellows. It seems as if his self-written story is similar to his interviews, it lacks coherence and focus. While I can appreciate Snyder’s dense imagery, it seems like he is assuming that the audience are going to make sense of everything that is in his head and not in the script.

It is important to remember however that Zack Snyder is a talented filmmaker who at least set out to make a visually interesting and original piece of work. Yes he did not succeed but I would rather be encouraging filmmakers like Zack Snyder to make their visual wonders and help him find a good story to match (hopefully something that has happened with the Christopher Nolan produced Superman reboot) The personal attacks on Snyder by the critics have been uncalled for and shown a lack of appreciation for a filmmaker who is trying to make films that demand a big screen viewing.

Two other criticisms of the film that I feel compelled to comment on, are the claims that it is sexist and that it being like a video game should be a criticism. First of all I do not believe this film is sexist, yes I am not a female but I have my reasons. The main claim for this film being sexist is the costumes that Baby Doll and her friends wear. These characters are not empowered by their skimpy costumes, they are empowered by their imagination and their strength. In fact I think the portrayal of Scarlet Johansson’s character in Iron Man 2 is much more dodgy than anything in Sucker Punch. The looks of the females in Sucker Punch are never exploited to the levels that Johansson and Megan Fox are in Iron Man 2 and Transformers.

Secondly, why is it bad if a movie is like a video game? Some video games in terms of visuals, storytelling and sheer emotions are achieving things that 80% or even 90% of Hollywood films are not. The ignorance concerning video games across the film criticism community really needs to stop as they are an art form that deserves more respect than to constantly be engaged with films that aren’t brilliant on the story telling front, because games like Heavy Rain, Red Dead Redemption, God of War and Mass Effect are. One more thing, as a 15-year-old boy I also find it offensive that my age group should be referred to as the only ones this film will appeal to. Critics say this film is condescending to females and then go on to ignorantly criticize the tastes of teenage boys and the value of an entire art form.

Overall I did not hate Sucker Punch and I hope that a director’s cut can greatly improve upon this films many flaws, as if rumors are true then a lot of dark material was cut from the film. I am not a Sucker Punch hater or worshiper, this film was ambitious and Snyder deserves credit for what he was trying to do. There are flashes of great filmmaking buried in Sucker Punch and a lot of the films unwarranted and over the top critics are overlooking this fact.

While visually impressive, this film lacks the cast, coherence, focus and darkness to really pack a punch.

Disagree with this review? Let us know your thoughts in the Your Say section