Writers: Craig Mazin, Scot Armstrong and Todd Phillips
Director: Todd Phillips
Starring: Bradley Cooper, Ed Helms, Zach Galifianakis and Justin Bartha
When The Hangover was released in 2009, I like many found it to be an enjoyable and at times hilarious film with a good central concept and a breakout comedic performance from Zach Galifianakis. Now two years later the sequel has hit and this time the boys are in Thailand to celebrate the impending marriage of Stu and Lauren, however after one beer on the beach they awaken in a hotel room in Bangkok with another mystery to solve and another person to find.

A lot has been said about how painstakingly unoriginal The Hangover 2 is and it is basically the first film remade but in a different location. The film follows the exact same beats as the first one from the opening phone call right through to the end credits photos, there is nothing new or original in this movie in the narrative or in the comedy. The reason why this is such a problem for the film is because unlike the first hangover it makes everything so predictable. When you follow all the same story beats as a film that came out two years ago then it is easy for the audience to guess what is coming next which completely crushes the sense of surprise and mystery that the first film thrived on.

This film goes to such lengths to recreate the original that it does not care how contrived or convoluted it has to be. The reasoning for Doug to be once again sidelined from the proceedings is just lazy while the reasoning for their morning state is an overly complex way of stating that basically the same thing happened again except this time it wasn’t meant to. The films unoriginality doesn’t just extend to its predecessor but it also rips off a sequence from The Other Guys. Todd Phillips was given 80 million dollars to play with for this film and he seemed to spend most of it on helicopters, speedboats and car chases rather than thinking of an original and witty script with original and witty humour.

In fact since The Hangover’s release I have seen the film multiple times and time has exposed it to be a one trick pony rather than a timeless comedy. The act of Zach Galifianakis was new and lovable in the first hangover but after Due Date and now this, his act, like the rest of the film has grown tired, stale and annoying. Repeat viewings of The Hangover reveal that it is not a timeless comedy classic but merely an enjoyable first viewing, The Hangover 2 does not even have an enjoyable first viewing as due to its similarities it just feels like a repeat viewing of the first film.

This predictability due to unoriginality also leads to boredom and an inability to suspend your disbelief. You start to question how the characters could let something like this happen again, why none of their wives keep them on a tighter chain, why at the films conclusion there is no damnation of their actions but instead a celebration and why a certain character is so blasé about losing a body part, another about getting shot and all of them about getting drugged. You see as long as you get to the wedding on time all of that stuff just doesn’t matter…

The Hangover 2 takes its three lead characters and makes them so unlikable and annoying that unlike the first one it is not fun to be spending time with these characters. Bradley Cooper who was so good at the helm of Limitless is reduced to somebody who you would never want as your friend, as in the opening ten minutes he cruelly rants at his friend for daring to get married in Thailand and to resist having a bachelor party.  Ed Helms as Stu starts the film as the most likable character but his role is then reduced to a series of annoying screams that make you want to cover your ears rather than laugh out loud. Allen, the first films secret weapon when it came to laughs is this time annoying and no longer the sweet presence he was in the first film but actually an unlikable, mean spirited buffoon. All of these three can do and have done better.

The contrivances, the unoriginality, the predictability and the feelings towards the characters could have all been forgiven if the film had done its desired job of providing laughs. If a comedy film can keep you laughing throughout its running time then it set out what it achieved to do and you can forgive or overlook its flaws, however I did not laugh once during The Hangover 2, not even once. A lot of people forget that there was a lot of subtlety and simplicity to a lot of the humour in the first hangover film, however all of that is gone here.

The humour in The Hangover 2 was desperate, over the top and on one occasion genuinely offensive. Did you know that a drug-dealing monkey was funny? That getting shot is funny? That losing a finger is funny? That having sex with a male prostitute and getting beaten up by a monk is funny? I cannot remember one line of dialogue from The Hangover 2 that made me laugh, the first film gave you some funny quotes such as the conversation about Rain Man, or the question about Caesars Palace but in this film there is not one line of comic dialogue that sticks in the memory. When you have this much talent on the screen and that much money to spend it is quite frankly unforgivable that the film could not squeak out one laugh.

I am not saying that I am above gross and silly humour as I am a fan of Austin Powers, of Zoolander, Dodgeball, Anchorman and the early Judd Apatow films but all of those films had wit to them, memorable, likable or funny comedic characters, quotes that I remember to this day and all have humour that stands up on a second viewing. Nor am I a hangover hater as I was a fan of the first film. One “joke” that some have voiced their concerns over regards a particular photo in the credits sequence that recreates in a mocking way the famous execution photo from the Vietnam War. How is that funny? What is so funny about recreating a photo that portrayed the brutal end of a mans life? If the photo had been mocking the execution of somebody from the western world not only would more people be upset about it but also it probably would not be allowed in the final cut of the film.

It was announced that Mel Gibson would be providing the celebrity cameo in this film however due to protests from the cast and crew he was later replaced with Liam Neeson whose scene did not make it into the final cut of the film. Here is my theory, the cast and crew knew they were making such a rushed, unoriginal, unfunny film filled with unlikable characters and desperate humour, they knew they were mocking a photo that should not be mocked, they knew they were making a film that ends with once again the celebration of the presence of a rapist and no damnation for any of their questionable actions that they had to take the moral high ground on something. It’s ironic because the one thing the cast and crew probably thought was a step too far might have actually provided the film with its only laugh.

I went into The Hangover 2 with zero expectations and wanting to find something in it after all the bashing it had been receiving. Whereas with Sucker Punch I felt a lot of the criticism aimed towards Zack Snyder was unnecessary and over the top, The Hangover 2 deserves all the criticism it has been getting. This is a film that people will like because they think they should but ask somebody who liked The Hangover 2 to say their favourite line or scene from the film in two years time and it, like the antics in the film will be gone from their memory. 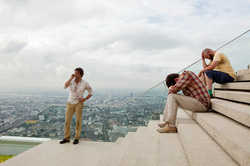 Unoriginal, predictable, desperate, unlikable and lacking in any laughter whatsoever, whatever with was in The Hangover...Hollywood has it now.

Your Say on "The Hangover: Part Two"

JOE BOUCHER:  I agree that the film was unoriginal and probably one of the only films that merits the disparaging review that normally accompanies comedies featured on this site. However I find myself disagreeing with the opinions expressed about the first Hangover film. When it was released it was a very original plot, and Galifianakis' brilliant performance was only dulled by films that followed it. I believe that you should be harrying later films such as Due Date and Dinner for Schmucks for tarnishing Galifianakis' archetypal character, and recognising the Hangover as the original, hilarious breakthrough that it was


PM REPLY: Thanks for your comment Joe. As far as disparaging reviews of comedies on this site, I believe that has more to do with the low quality level of comedy films released in 2011 rather than this site's view of the genre. I believe I do mention Due Date in the review as contributing towards my feelings regarding Galifianakis and his performance, unfortunately (Or fortunately from what I have heard) I did not see Dinner for Schmucks. You are right in what you say about the first Hangover and I admit that my feelings regarding this sequel may have tarnished my perception of what I truly thought about the original when I first saw it, an opinion that was much closer to the view you just expressed. If you are interested in seeing a film where Galifianakis plays a different role, I highly advise you check out the sadly underrated and little seen film, "It's Kind of a Funny Story"
Thanks again for commenting and I hope you continue to do so.