The Ides of March

Writers: George Clooney, Grant Heslov & Beau Willimon
Director: George Clooney
Starring: Ryan Gosling, George Clooney, Phillip Seymour Hoffman, Paul Giamatti, Evan Rachel Wood & Marisa Tomei
Next year, the United States of America will once again go to the polls to elect the most powerful man in the world. Three years ago Barack Obama had galvanized a nation with his promises of hope and change, leading George Clooney to cancel his plans to make The Ides of March, a morality thriller about the dark underbelly of U.S. politics. However following that historic election Barack Obama has not cured cancer, ended poverty or brought about world peace and once again cynicism has returned to the public’s political perception…leading George Clooney to sit in the director’s chair once more for this adaptation of the play, “Farragut North”

Stephen Myers (Ryan Gosling) is a young, idealistic and driven campaign manager for Governor Mike Morris (George Clooney), a candidate for the Democratic nomination for president. Working under the mentorship of respected Paul Zara (Phillip Seymour Hoffman) Myers is confident that Morris is the only politician who is actually going to make a difference in peoples lives, stating to news report Ida Horowicz (Marisa Tomei) that Morris, “Has to win” however when Myers begins a sexual relationship with intern Molly (Evan Rachel Wood) and becomes allured with the approaches of rival campaign manager Tom Duffy (Paul Giamatti) his life and the campaign threatens to spiral out of control.

The first half hour or so of The Ides of March would have you believe that the film is a drama that requires a keen interest in politics in order to fully appreciate some of its West Wing esque dialogue exchanges. Ideas are highlighted such as whether the U.S. would elect an atheist president, why the democrats find themselves on the losing side more often than not and the relationship between politics and the press. Unfortunately for the political purist these ideas are never explored to their fullest as a potential political drama falls by the wayside to make room for a morality thriller. However despite losing and/or lacking a degree of political depth, The Ides of March proceeds to be one of the most gripping and well acted films of the year so far.

The standouts in what is a uniformly strong cast are Ryan Gosling, Evan Rachel Wood and Phillip Seymour Hoffman. As the film’s lead, Gosling starts the film as a bright eyed, charismatic and perhaps arrogant presence, however as the film gets darker so to does the character of Gosling both in what he does and how he is shot. Gosling’s transformation in this film and his character’s loss of innocence is realistically and entertainingly done with Gosling telling a lot of the story through facial expressions, it is an internal performance and one that gets more subtle as the story becomes less so. The chemistry between Gosling’s character and the character of Evan Rachel Wood seems to be initially lending the film a comedic and romantic edge however as the story thickens, the performance of Evan Rachel Wood becomes more impressive, particularly in one scene, where she has to initially subdue her desperation and fear regarding a particular plot development.

While George Clooney does play a role in this film and effectively so, it is behind the camera where he spends the majority of the film’s running time and that is where he makes the most impact. Along with cinematographer Phedon Papamichael (What a last name that is) the film is shot well with a complementary shift in lighting as the story progresses. Clooney also manages to squeeze genuine tension out of scenes that merely involve a phone vibrating or a stationery car. While the film could have made effective use of an extended running time, the film is paced so well and zips along at its one hour, forty minute length. This is also a film best approached without knowledge of the exact nature of the scandal within the film that causes the disillusionment of the Gosling character, as the film is all the more gripping (And perhaps for younger viewers less versed in political thrillers of the past) and unpredictable for it.

While many young viewers will most likely skip The Ides of March, despite the attraction of, “The Notebook” and “Crazy, Stupid, Love” star Ryan Gosling, this is a film whose plot turns will be more effective upon those who have not seen Primary Colours and/or The Candidate. Seeing the film with my father at this year’s Zurich Film Festival one of his two main complaints was a lack of originality, citing the above two films as obvious influences upon the film’s central scandal. While this was less of an issue for a younger viewer such as myself who has only seen one of those films (And is now keen to see the other) your interest in and knowledge of both politics and political thrillers of the past may affect your opinion of this film.

One of the unexpected demands of The Ides of March is a slight suspension of disbelief when the conspiracy element of the narrative clicks into full gear as the contrivances of it, rely on a lot of character assumptions, some of which seem too premeditated to be totally plausible. Overall despite its unoriginality, contrivances and a lack/surrender of political depth, The Ides of March is a superbly acted, well directed, gripping, tense and unpredictable, has a suitably stellar Alexandre Desplat score, a cyclical chilling conclusion and one of the lines of the year. 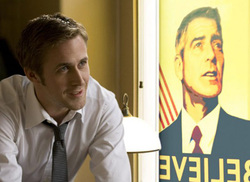 It may not break new ground in its genre or explore the true depths of its characters and content, however this is one of the year’s most gripping and well-acted films.

Disagree with this review? Give us all your thoughts on The Ides of March in the Your Say section.