Writers: Ashley Miller, Zack Stentz and Don Payne
Director: Kenneth Branagh
Starring: Chris Hemsworth, Tom Hiddleston, Natalie Portman and Anthony Hopkins
In 2012 The Avengers will hit the big screen and will either be the ultimate superhero movie or a huge anticlimax given the five films and four year build up. Since the scene after the ending credits of Iron Man, Marvel fans have been waiting to see all their favourite heroes share the big screen together, until we reach that glorious moment for comic book fans across the world however, there are still two more films to see. The first of which is the Kenneth Branagh directed, Thor.

The story of Thor focuses on the god of thunder and his banishment from the mythical world of Asgard to Earth due to his brash and reckless actions in the long going feud with the (awesome) Frost Giants. When Thor gets to Earth he finds that his godly powers have been taken from him and that his brother Loki has taken his place as king of Asgard. With the assistance of Jane, Thor learns what it means to be a man and a hero. There is no escaping the fact that the story of Thor is undeniably silly and thoroughly ridiculous. Infact Thor is the hardest of the pre Avengers films to pull off. It is centered on a god, a being full of powers which never helps when trying to make a superhero character relatable and interesting (Superman) He wields a hammer rather than spider webs or advanced technology and it is heavily steeped in mythology and fantasy, making it seem more like a fantasy adventure than your standard superhero movie.

It is a reasonable achievent then that Thor manages to be a perfectly entertaining film that has enough good performances, humour, and impressive special effects to be a film that is enjoyable enough to make you forget the ridiculousness of the plot. When Kenneth Brannagh was announced to be directing Thor, it led many to think that we would be getting a more mature superhero film than most, however the great joy of Thor and its best moments come from the comedic rather than dramatic elements.  While the dramatic elements have Shakespearean undertones, Branagh never elevates the drama to such levels, nor should he. Thor is at its best in the earth bound scenes where Thor is a god in denial. Him walking into a pet shop and demanding a horse is one of the comedic highlights.

The film also has some well-done action sequences, with one fight towards the beginning of the film with the very well done Frost Giants being a particular highlight of the films special effects capabilities. However it is the scenes that did not involve action which were are the films strongest, the afore mentioned comedic scenes were among them, however the discussions and confrontations between Thor and Loki were the dramatic highlights of the film.

It is the performances however that make Thor work, particularly of the two main brothers Thor and Loki played by Chris Hemsworth and Tom Hiddleston respectively. Hemsworth gives a great performance and is able to pull off the arrogant god, the unaware comic and ultimately the hero. Seeing his Thor and Robert Downey Jr’s Iron Man play off each other is what I am most looking forward to about The Avengers. Tom Hiddleston also gives a good performance as the sneaky and deceitful Loki. Natalie Portman gives the most disappointing performance of the film as after the brilliance of Black Swan, it is frustrating to see her giving such a phone in pay check performance, with a character who is boring and unmemorable.  In fact the love story between Thor and Jane never really works, is rushed and under developed. However the way it is concluded is slightly less cheesy than I predicted and therefore slightly better.

Rushed and under developed could explain a lot of this film. Thor’s earth journey from arrogant god to graceful hero does never really feel like much of a journey. It is also doesn’t help that at times the film drags slightly and is not as consistently entertaining as the Iron Man films. Another problem with this film is the complete unnecessary, cash grabbing 3D. This film was not made with 3D in mind and does not need nor compliment the 3D technology. The special effects and art direction stand up on their own right and do not need to be darkened by 3D.

In terms of Avengers build up, unlike Iron Man 2, Thor does not drown in it. Thor stands up on its own two feet as its own film. However the references to The Avengers are tantalizing and comical. An appearance of an Avengers character and a comical reference to Tony Stark both work really well and are satisfying to Marvel fans but not intrusive to first time viewers. The after credits scene is worth staying for if you are highly anticipating The Avengers as it is a great set up to what the main threat in that film could possibly be.

Ultimately Thor is no great of the superhero genre and is not as good as the Iron Man films, although significantly better than The Incredible Hulk. It stands up as its own film, has good performances and genuine well done comedic moments that help Thor be enjoyable despite its rushed, occasionally dull and unnecessarily three dimensional nature. 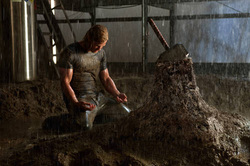