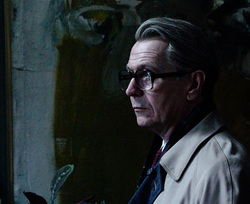 If there is one scene that perfectly encapsulates the tone of Tinker Tailor Soldier Spy and its difference from films of a similar ilk it is one without dialogue that takes place in a car. As a fly buzzes around, Peter Guillam (Benedict Cumberbatch) flaps his arms in desperation in an attempt to overawe the fly, George Smiley (Gary Oldman) on the other hand slowly rolls down his window allowing the fly to makes its own way out. Recent “spy” movies have treated the audience like a fly, flapping them with so much brainless action and kinetic editing, hoping that we will be overawed enough to leave happy. Tinker Tailor Soldier Spy on the other hand is a film that slowly and calmly reveals itself, allowing you to find your own way.

Given that the original source material has previously been adapted into a five hour BBC miniseries, it is an achievement of adaptation that writers Peter Straughan and the late Bridget O’Connor (To whom the film is dedicated) have written such a dense, yet relatively brief, screenplay. There are multiple moments in Tinker Tailor Soldier Spy that hint to a wider universe yet you never feel as if you are watching a film that lacks depth. While fans of the book and series may disagree with this, as somebody who has read or watched neither, this story certainly works as a two-hour film. One of the elements, which helps Tinker Tailor Soldier Spy feel like a cinematic rather than episodic experience, is the direction of Tomas Alfredson.

During a scene where George Smiley has a rare monologue, Alfredson decides to have a super close-up upon the face of Gary Oldman as he impersonates his unseen Russian nemesis, Karla. Through this shot there is no barrier whatsoever between Smiley and the audience, as Tomas’s camera picks up on every little facial tick. Set during the height of the cold war, Alfredson manages to build up some considerable tension from seemingly unimportant background objects.

As a plane lands and gets closer and closer to the two characters in the foreground, there is a nervous anticipation that this plane will not only run over these characters but the audience as well. As the plane gets closer and its propellers louder, the plane suddenly veers to the right almost prompting a sigh of relief. This sequence could easily be shown as a one minute short and titled “The Cold War” such is the way the plane’s movements evoke feelings of fear, tension and relief. The film’s opening is one that also has all the possible tension squeezed out of it by Alfredson’s direction. As the sound mutes to make the drop of sweat sound like a waterfall and each shot is filled with a suspicious presence.

Alfredson along with casting director Jina Jay has truly assembled a cast that represents the best of British acting talent. Gary Oldman is receiving many of the plaudits for his performance of George Smiley, a performance that is of stark contrast to the performances upon which Oldman built his legacy. Smiley is probably the most silent, subtle and subdued character of the year; it takes him up to twenty minutes or so into the film before he opens his mouth. However the moments where Smiley’s chilly demeanor does crack become even more effective. During a flashback sequence to a Christmas party, Smiley stumbles upon a secret and the look of shock and pain etched on Oldman’s face in those five seconds is simply superb acting. One of the film’s more memorable scenes is Smiley simply recollecting a discussion he had with adversary Karla. The way, in which Smiley recreates the conversation, leading Oldman to brilliantly slur the words “We’re not so very different you and I…we both spend our lives looking for the weaknesses within one another” is brilliant.

This is not a one-man show however and four other performances go toe to toe with Oldman’s. As Ricki Tarr, Tom Hardy continues to steal every scene he is in, in every film he is in. Ricki Tarr’s Turkish tale is another segment of the film that could easily be presented as a stunning short. As we flashback to Tarr spying and falling in love we are wonderfully supported by Hardy’s soliloquy esque narration and the excellent Alberto Igleisias score. Benedict Cumberbatch demonstrates that he may be occupying Mullholland Drive as well as Baker Street with his performance as Peter Guillam. Benedict is handed one of the films tensest scenes as he is forced to spy on his own in order to retrieve some documents for Smiley. Cumberbatch also however has a brief five-second moment of emotional self-destruction to rival Oldman’s in a scene that strays away from the source material.

The two actors who make the most of their relatively limited screen time however are Mark Strong and Colin Firth. Strong shows in this film that Hollywood need not continue to cast him as a stereotypical villain. As Jim Prideaux, Strong brings the tragedy to this tale. It is his moments with Firth however that elevate both their performances and the film. A simple glare between the two of them at the Christmas party is one of the small moments that elevated this film to greatness and along with Take Shelter’s final scene deserves to have its multiple meanings enthusiastically discussed. As you may have deciphered this is not an action-laden film and instead substitutes explosions for expressions. A single tear rolling down a character’s cheek in this film is ten times more thrilling than the bombastic final hour of Transformers: Dark of the Moon.

Tinker Tailor Soldier Spy is not a film that will be to everybody’s tastes however. The film is quite demanding on its audience in the sense that it takes its time telling its story and demands that you are not only patient but are fully concentrating. If you play with the film on its own terms and give it the patience and concentration that it desires the rewards are remarkable. This is a film that I think will only improve upon multiple viewings as the story and subtleties become clearer. While you could criticize the film for having characters as cold as the war which surrounds them, Tinker Tailor Soldier Spy is a much more emotional film than many give it credit for, especially if you closely observe the Strong/Firth character relationship.

The film gradually gets better and better, with its closing montage easily being one of my favourite scenes of this year as the film perfectly reaches its conclusion. The choice of music and shots works fantastically and would even make the masters of such filmmaking Scorsese and Tarantino jealous. Overall Tinker Tailor Soldier Spy is a film, which I cannot wait to see again and despite my initial reservations while viewing its first movement, built into what was some of the best filmmaking, writing and acting I have seen all year. It’s not my favourite film of the year…yet. 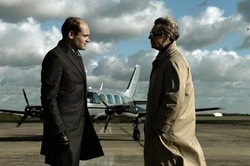 A demanding yet rewarding film containing astoundingly directed and acted scenes, it may burn slowly but it explodes superbly.

Disagree with this review? Give us your thoughts on Tinker Tailor Soldier Spy in the Your Say section.