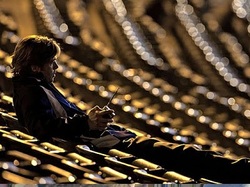 Writers: Aaron Sorkin and Steven Zaillian
Director: Bennett Miller
Starring: Brad Pitt, Jonah Hill and Phillip Seymour Hoffman
A sports film with a mathematical twist, doesn’t exactly sound like a recipe for success does it? In this adaptation of the Michael Lewis 2003 book, Brad Pitt stars as Billy Beane, general manager for the Oakland Athletics (A U.S. baseball team). Following a play-off defeat and the loss of key players, Beane is faced with rebuilding his side on a budget that pales in comparison to the money being offered by teams such as the New York Yankees.  However a meeting with Yale economics graduate Peter Brand leads him to discover a new way of discovering and evaluating players, through in-depth mathematical statistics. Along with Peter Brand, Beane sets out to reinvent the way in which the game is viewed, challenging both the baseball establishment and the demons of his past.

While the book “Moneyball: The Art of Winning an Unfair Game” is a book that has little appeal beyond those interested in sports (Even more so baseball) and/or mathematics, the film adaptation of Moneyball aims to interest a wider audience however does not compromise the books original intent to do so. Written by Steven Zaillian and (Hollywood’s best) Aaron Sorkin, the screenplay of Moneyball manages to take a statistics filled, non-fiction piece of text and transform it into an engaging and thematic, fictional and cinematic experience. As you would expect from a script with the touch of Sorkin, the dialogue is witty, intelligent and believable.

An adaptation of this source material could have easily lent itself to a TV documentary, however a further way, beyond the screenplay, in which this film is made to look and feel like a big screen viewing is through the cinematography of Wally Pfister (Now a frequent Christopher Nolan collaborator) the baseball stadiums present in the film are all shot beautifully, romanticizing each location in a way that gave even a non baseball fan, a sense of the history and the meaning of that grass and those seats. What stands in Moneyball’s first base however are the performances of Brad Pitt and Jonah Hill.

As Billy Beane, Brad Pitt gives what is perhaps his most human and relatable performance to date, he is not ageing backwards, robbing casino’s with George Clooney or on a bloodthirsty search for Nazi scalps. As Billy Beane, Brad Pitt plays a man with an underlying anger at the way in which he let the uniformed opinions of men dictate the way in which he chose his life path, a man who has realized that his significant contribution to the sport he loves will not be on the field, yet he cannot determine what it will be off it when just like his playing career, the odds are stacked so unfairly against him. While the Billy Beane of this film does in moments exhibit a confident charisma, it is in the silent scenes of self-reflection in which the performance of Pitt is at its finest.

As Peter Brand, Jonah Hill may have just changed the way in which people perceive the potential of his career. Following the success of Superbad, Jonah Hill became characterized as an over the top comedic presence. In Moneyball however Jonah Hill plays against type and instead gives a much more subdued and subtle performance, a role, which has comedic elements, but elements that are understated and which do not dominate the majority of his lines or screen time. As the coach of the Oakland Atheltics, Phillip Seymour Hoffman is not given a lot to do but is once again dependable and believable in what he does, with a lot of his performance and character coming from his facial expressions, a performance that is both internally and externally of stark contrast to his role in The Ides of March.

Moneyball’s plot may not be of similar interest to everyone, however anybody with an interest in sports or an interest in human drama and comedy, has something to enjoy in this film. While it is reasonable to doubt the films relevancy or impact for those who do not reside in the U.S. or follow baseball, this is a film with a universal message and a story that is just as potent for the sport of football. However of course the makers of the film felt like a more emotional element needed to be included in the narrative in order to appeal to a wider audience and this comes through the relationship between Billy Beane and his daughter.

While the scenes with Billy and his daughter are perfectly well acted and sweet you feel it is a superfluous addition for three key reasons. One is that an emotional connection is already firmly established with Billy Beane due to the flashbacks of his failed career and I would rather that element be given more screen time than the daughter subplot purely due to the fact that the failed career is more complementary thematically to the rest of the story. Additionally at a running time that exceeds two hours, you do feel like more footage could have hit the cutting room floor, the daughter subplot included. Having said that however, the daughter subplot does provide the film with a sweet note to close on.

A third reason is that the relationship between Billy Beane and Peter Brand is ultimately the relationship of the entire film. Although upon initial thought Brad Pitt and Jonah Hill would seem like an odd pairing, the two have great chemistry together and play off each other incredibly well. As men who both feel ostracized from the world in which they inhabit, it is through their partnership in which they can help each other gain confidence, self-belief and appreciation of one’s achievements. To use a term that is more commonly used in association with the previous work of Jonah Hill, it may be the “bromance” of the year.

Despite the fact that the film is ultimately too long for what it is, you feel the length in your bottom not in your brain. To keep you engaged and entertained for the entire length of a running time that exceeds two hours is a rather large achievement, as most films that exceed the two-hour mark will bore you at some point. However perhaps as my interests are more in line with the films narrative, I never found my attention once waver from the film as it played in front of me. What is quite outstanding about the story behind Moneyball is just how cinematic it is in retrospect, proving that you cannot make up something crazier or more emotional than the game (Whatever game that may be)

While at times Moneyball may veer on the side of cliché it is a film that manages to be at time genuinely sweet, heart-warming and even inspirational without feeling overly sentimental (Except perhaps with the daughter subplot) Overall Moneyball is a film with its heart in the right place, an interesting concept, two good performances and a great double act leading, as well as being constantly engaging and entertaining despite its excessive running time and unnecessary narrative additions. 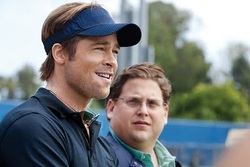 It may be a few bases away from a home run (apologies) however this is easily one of the most enjoyable films of the year, one that is unique within its genre and handled with intelligence and heart.

Disagree with this review? Give us your opinions on Moneyball in the Your Say section.